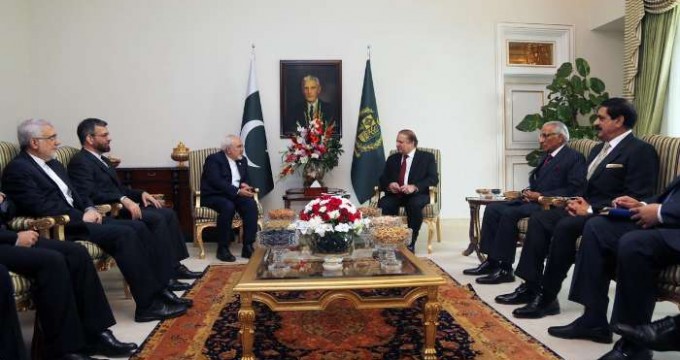 Zarif made the remarks in a meeting with Pakistani Prime Minister Nawaz Sharif in the capital Islamabad on Wednesday.

The top Iranian diplomat referred to the December 2 report by the International Atomic Energy Agency (IAEA) about Tehran’s atomic program, saying that the report indicates “no diversion” in Iran’s nuclear activities.

Zarif remarks come after the P5+1 group of world powers submitted to the IAEA’s governing board a draft resolution on Iran’s past nuclear activities, which Iran says will bring an end to past and present outstanding issues regarding Tehran’s nuclear program.

The IAEA Board of Governors is set to vote on the draft resolution in mid-December. Tehran says it will implement a nuclear agreement signed with the six world powers in July once the file is completely closed.

The IAEA has been tasked with the monitoring and verification of technical issues under the landmark agreement, dubbed the Joint Comprehensive Plan of Action (JCPOA), Iran struck with the P5+1 group – the US, Russia, the UK, France, China and Germany – in the Austrian capital, Vienna, on July 14.

On the same day, a roadmap for “the clarification of past and present outstanding issues” regarding Iran’s nuclear program was signed by IAEA’s chief Yukiya Amano and Head of Atomic Energy Organization of Iran Ali Akbar Salehi in the Austrian capital.

Under the JCPOA, limits are put on Iran’s nuclear activities in exchange for, among other things, the removal of all nuclear-related economic and financial bans against the Islamic Republic.

The Pakistani premier, for his part, praised as satisfactory Iran’s cooperation with the IAEA to settle issues pertaining to Tehran’s nuclear program.

During the meeting, Zarif and Sharif also discussed the latest developments in the Middle East and underlined the necessity of boosting regional cooperation for the settlement of ongoing crises in the region.

Zarif, who arrived in Islamabad on Tuesday to attend the 5th “Heart of Asia – Istanbul Process” Ministerial Conference, also sat down with Afghanistan’s President Ashraf Ghani.

In the meeting, Zarif and Ghani underlined the need for combating terrorism and drug trafficking in the region.

The 5th Heart of Asia ministerial meeting kicked off in Islamabad on Wednesday to discuss the situation in Afghanistan 14 years after the US-led invasion of the country. The meeting is attended by the foreign ministers of 26 countries.