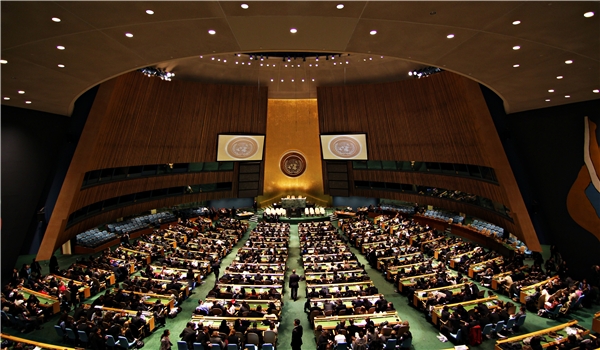 TEHRAN (Tasnim) – The United Nations (UN) General Assembly approved a resolution proposed by Iran on global nuclear disarmament.
The non-binding resolution was adopted on Monday at a session of Disarmament and International Security Committee of the 70th UN General Assembly underway in New York.

Despite strong opposition by the US, the Israeli regime and some certain Western countries, Iran’s proposal on global disarmament was passed with a recorded vote of 121 in favor, 48 against and 12 abstentions.

During the session, 57 draft resolutions on various international security issues, including nuclear disarmament at regional and international levels were also adopted.

The resolution urges nuclear-armed countries to make efforts to scale down their nuclear activities in an attempt to promote international stability and security. It specifically calls for the full annihilation of nuclear arsenals under international supervision.

The Assembly acknowledged the ethical imperatives for nuclear disarmament and the urgency of achieving and maintaining a nuclear-weapon-free world, which was a “global public good of the highest order”, serving both national and collective security interests.

The Islamic Republic of Iran had earlier called on all signatories to the nuclear Non-Proliferation Treaty (NPT) to follow up on the implementation of their obligations as agreed at the 1995, 2000 and 2010 Review Conferences at the UN General Assembly.

Speaking during the course of the meeting were representatives of Iran, Italy, Zimbabwe, South Africa and the Netherlands.

Ambassador and Deputy Permanent Representative of Iran to the United Nations Gholamhossein Dehghani stressed that the international community attaches great emphasis to nuclear disarmament, and urges all nuclear-armed countries to make good on their obligations in this regard.