Republican presidential front-runner Donald Trump on Monday called for a ban on Muslims entering the United States in the most dramatic response by a candidate yet to last week’s shooting spree by two Muslims who the FBI said had been radicalized.

“We have no choice,” Trump said at a rally in South Carolina, warning of more Sept. 11-style attacks if stern measures are not taken.

Trump’s statement on “preventing Muslim immigration” drew swift and fierce blowback from many directions, including the White House, rivals for the 2016 Republican presidential nomination, Democratic presidential front-runner Hillary Clinton and Republican former Vice President Dick Cheney, who said the idea “goes against everything we stand for and believe in.”

“Donald Trump is unhinged. His ‘policy’ proposals are not serious,” Republican presidential hopeful Jeb Bush said in a tweet.

Other social media reaction led hashtags such as #racism, #fascism and #bigot to trend heavily.

Trump, the billionaire developer and former reality TV star who frequently uses racially charged rhetoric, called for a complete shutdown of Muslims entering the United States “until our country’s representatives can figure out what is going on.”

“Until we are able to determine and understand this problem and the dangerous threat it poses, our country cannot be the victims of horrendous attacks by people that believe only in Jihad and have no sense of reason or respect for human life,” Trump said.

Trump campaign manager Corey Lewandowski, asked in an email if the shutdown would apply specifically to immigration or more broadly to student visas, tourists and other travelers to the United States, replied: “Everyone.”

In Mount Pleasant, South Carolina, Trump dismissed his critics. He told a rally that mosques in the United States should also be scrutinized. “We have to see what’s happening,” he said.

Trump went farther than other Republican candidates, who have called for a suspension of a plan by President Barack Obama to bring into the United States as many as 10,000 Syrian refugees fleeing their country’s civil war and Islamic State militants.

Trump’s remarks followed last week’s massacre in San Bernardino, California, by a Muslim couple. The husband, Syed Rizwan Farook, was U.S.-born. The wife, Tashfeen Malik, was born in Pakistan and came to the United States from Saudi Arabia. The Federal Bureau of Investigation said on Monday the couple had been radicalized.

REACTIONS FROM “REPREHENSIBLE” TO “GO TRUMP”

“This is outrageous coming from someone who wants to assume the highest office in the land. It is reckless and simply un-American. Donald Trump sounds more like a leader of a lynch mob than a great nation like ours,” Awad said.

White House spokesman Josh Earnest told MSNBC that Trump is “seeking to tap into a darker side, a darker element, and try to play on people’s fears in order to build support for his campaign.”

Obama on Sunday night in an Oval Office address called on Americans to be tolerant of fellow citizens regardless of their religion.

Trump’s aim is to bolster his position among conservative voters who have kept him atop opinion polls of Republican voters for months, to the point that establishment Republicans fret he could win the nomination and do so poorly in the general election next November that Republicans could not only lose the White House but also control of Congress.

Whether Trump will pay a price for the move is unclear. He has shown a proclivity toward insulting people with no penalty, from saying a storied Vietnam veteran, Senator John McCain, is not a hero to blasting Fox News anchor Megyn Kelly.

The most recent Reuters/Ipsos poll found stark differences between Republicans and Democrats in how they view Muslims. The poll, which was conducted after last week’s San Bernardino, California, attacks, found that 69 percent of Republicans expressed at least some fears of Muslims, compared with 39 percent of Democrats.

Trump said in an interview on Fox News that his proposal would not prevent Muslims who are serving overseas in the U.S. military from returning and would not apply to people already living in the country, “except that we have to be vigilant,” he said.

To support his proposal, Trump pointed to data from the conservative think-tank Center for Security Policy indicating that a quarter of Muslims in a poll thought violence against Americans was justified.

The center’s president, Frank Gaffney Jr., has been critical of Muslims in America, and the Southern Poverty Law Center, a civil rights group, calls him “one of America’s most notorious Islamaphobes.”

South Carolina’s Graham tweeted that Trump has “gone from making absurd comments to being downright dangerous with his bombastic rhetoric.”

Ohio’s Kasich said: “This is just more of the outrageous divisiveness that characterizes his every breath and another reason why he is entirely unsuited to lead the United States.”

A spokesman for Republican presidential candidate Ben Carson, Doug Watts, said Carson did not believe that religion should be a litmus test for entry to the country but said everyone visiting the United States should be monitored during their stay, saying that is the case in many countries. 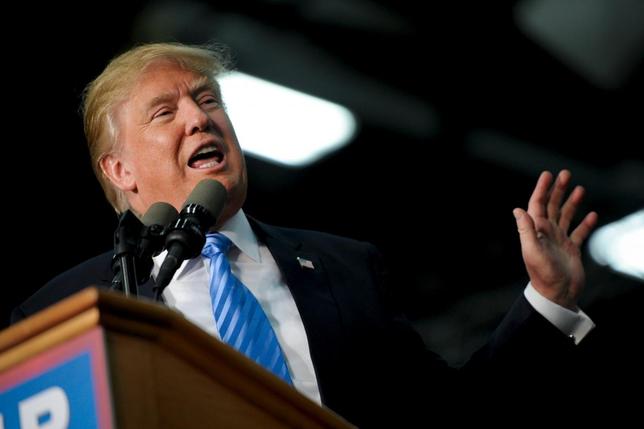