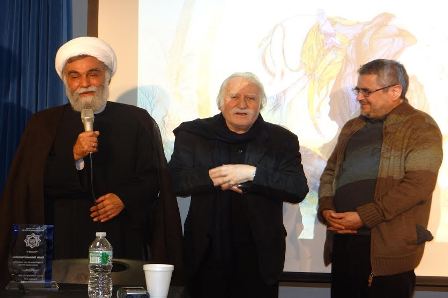 Tehran, December 7, The Iran Project– Imam Ali Mosque Islamic Institute in New York honors the Iranian master of painting and miniatures, Mahmoud Farshchian and his great contributions to the Islamic and Iranian art.

During a ceremony that was held to commemorate Arbaeen and the death of Prophet Mohammad (PBUH), the Imam Ali Mosque Islamic Institute in New York honored the world-renowned Iranian artist, Mahmoud Farshchian and his efforts to promote Islamic arts and specifically to glorify the household of Prophet Mohammad.

Iran’s Ambassador to the United Nations Gholamali Khoshroo, Iran’s mission staff and Iranian citizens living in the United States attended the ceremony, during which a university professor and a senior cleric at the Islamic institute made speech about Farshchian and the great share he has played in introducing the art and culture of Iran and Islam to the world.

In his brief speech, Farshchian pointed his inspiration and personal memories before and amid creating artworks. In concluding part of the ceremony, a monument was presented to Farshchian to appreciate his great contribution.

He was further chosen as an outstanding 21st century intellectual by Cambridge and has received an honorary doctorate in fine arts.