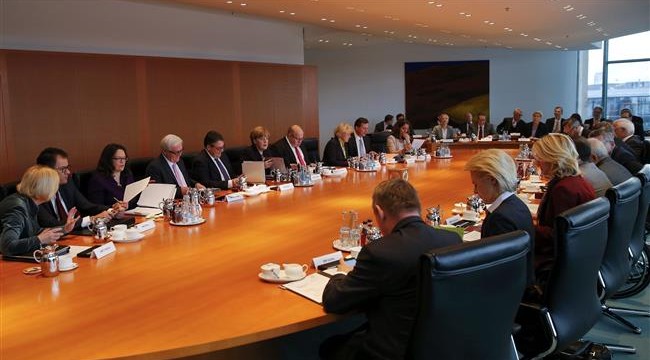 The German cabinet has endorsed a mandate offering military assistance to the US-led coalition in its combat against positions allegedly held by the Takfiri Daesh terrorists.

In a statement released on Tuesday, the German government said that the plan covers Tornado reconnaissance aircraft, a naval frigate and as many as 1,200 soldiers.

The one-year mandate, which still needs parliamentary approval, costs 134 million euros (142 million dollars) and can be prolonged in 2016.

This would be the largest military mission at the moment by Bundeswehr, the unified armed forces of Germany and their civil administration and procurement authorities, following a reduction in the number of forces as part of the US-led invasion of Afghanistan.

Ahead of the cabinet vote, German Foreign Minister Frank-Walter Steinmeier, told the daily Bild that it could be a protracted fight, adding, “We need patience against an enemy like IS (Daesh).”

Andre Wuestner, the head of the Bundeswehrverband, Germany’s armed forces union, also predicted that the anti-Daesh fight would last “far more than 10 years.”

Since September last year, the US along with some of its allies has been conducting air raids against what are said to be the Daesh terrorists inside Syria without any authorization from Damascus or a UN mandate. The air assaults in the Arab country are an extension of the US-led aerial campaign against purported Daesh positions in Iraq, which started in August 2014.

“The result is that the terrorists have gained more ground and more recruits from around the world,” he stated.

Germany is a member of the US-led coalition against alleged Daesh targets, but it is only providing logistical and technical assistance.

This file photo shows the Takfiri Daesh terrorists in an undisclosed location in Syria.

The German government’s move came following talks between German Chancellor Angela Merkel and French President Francois Hollande, during which the latter urged more countries to help fight the Daesh elements after the recent deadly attacks in the French capital city of Paris.

On November 13, assailants struck at least six different venues in and around Paris, leaving 130 people dead and over 350 others wounded. In a statement the day after, Daesh claimed responsibility for the fatal assaults.