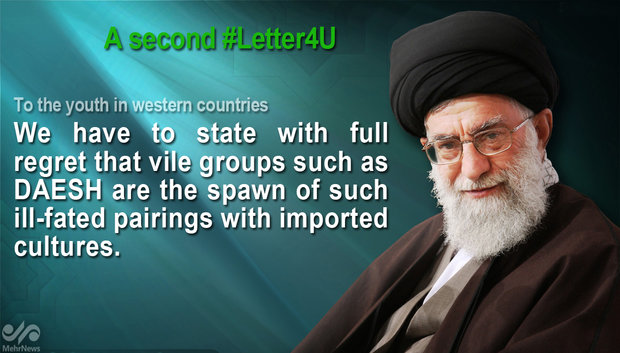 TEHRAN, Dec. 01 (MNA) – Political commentator and media activist Waqar Rizvi has discussed why Ayat. Khamenei’s letter is written fro the western youth and what is not said in that.

All words that will be spoken, written, and read (or not!) about Ayatollah Seyyed Ali Khamenei’s second letter to Western youth will be telling. While the content can be spoken of, twisted to fit specific narratives, analyzed through prejudicial lenses at length, what will be ignored is what wasn’t said, and why the letter was written to begin with.

That Ayatollah Khamenei needs to write two letters, so far, directly to Western youth, instead of simply giving speeches, or releasing press statements can be interpreted in a few ways.

The letter, a condemnation of terrorism, can also be seen as a plea for self-reflection and clarification of misreported facts at a time of heightened tensions, bloodshed, war, occupation, hate. Indeed, in the twilight zone where many Islamophobes live, Muslim leaders never speak out enough against the senseless killing of Western innocents. The fact remains that Muslim leaders, such as Ayatollah Khamenei himself, have always spoken out against terrorism and oppression of all sorts against all people regardless of age, race, faith, albeit in a manner that Islamophobes do not find convenient. No one likes to be criticized, and that is no different in the Western world. Yet, Muslim leaders are beyond limits on who to criticize and who not to. If it is Western policies which have provided fodder for terrorists to grow, then that must be pointed out unapologetically. There need not be censorship of the truth.

Another way to see this letter, as in the previous one, is the lack of an alternative medium for a Muslim leader to get his voice out there. In trying to directly address the audience, and providing direct links to the letter, this is an attempt to overcome mass media that has proven its bias against the likes of Ayatollah Khamenei by constantly twisting his actual words to fit their narrow, hate-filled vision. This puts Muslim leaders into a box in which they do not belong, and they are not sitting silently by accepting this situation. While it can be argued that such a letter is good for Muslims to read and reflect on as well, the goal is beyond just the Muslim community. In a world so divided along ethnic and sectarian lines, breaking through barriers is no easy task. Even if one does not agree with the content of Ayatollah Khamenei’s letter, it is important to note that in limiting the medium available to Muslim leaders, one in fact limits the very free speech most spoken of as a fundamental human right for all. Ayatollah Khamenei, as any other person on Earth, has a right to speak his mind and to be given a fair hearing. Again, one’s personal feelings about the content of such communication is of little consequence. It must be repeated that for a world which wants Muslim leaders to speak up more, it cannot then limit their ability to do so when they do speak out.

Beyond why the letter was written is what may be the more important aspect: what Ayatollah Khamenei did NOT say. In his first letter, he made it clear that he does not expect anyone to simply believe him about what Islam is and isn’t, encouraging all to study Islam directly and independently through the Quran and Ahadith (Prophetic narrations). In this more political letter, Ayatollah Khamenei does not speak to sell the Islamic Republic of Iran to the world. This is not pro-Iran propaganda, but is a Muslim leader speaking his mind. That he is also the Leader of the Islamic Revolution is a minor detail here, which is much too magnified. If he were indeed only representing Iran through such letters, why hasn’t he done a better job of in fact speaking about Iran?

That he hasn’t proves the goal is much beyond any propaganda. That every Muslim leader is immediately seen within the prism of national politics, be it Ayatollah Khamenei or Ayatollah Sistani, is proven by the shock, unsure reactions, or simple ignorance of every time any of the above and others legitimately criticize their own respective governments. Muslim leaders are beyond needing to appease anyone, and this is not an “us versus them” moment. Those who must be called out will be called out regardless of who they are. This is an honorable tradition among Muslim scholars and they are duty-bound to be just, critically looking at all who would prefer otherwise, within or outside their societies.

For most Westerners, Ayatollah Khamenei is only known through what they are told, often negative, and that is too bad. Even if they were to choose not to agree with his opinions, they must be given all the information to be able to make that decision properly and independently. This letter, as well as the previous and possible future ones, signifies a dialogue needs to occur. Ayatollah Khamenei is stretching his hands out for such a conversation, but is anyone on the other side willing to respond in kind?