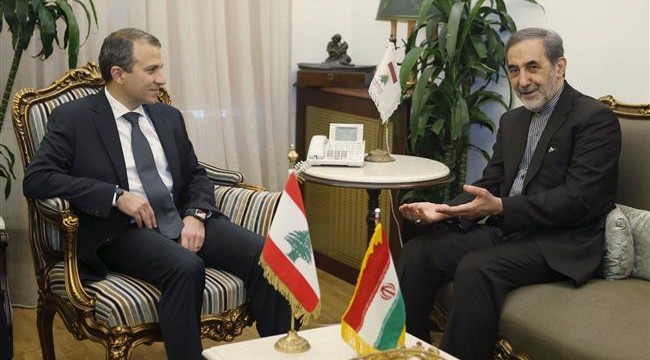 A senior Iranian official says Iran and Lebanon play a leading and influential role in establishing peace in the Middle East, urging the two countries to exchange more visits amid regional unrest.

“The relations between the Islamic Republic of Iran and Lebanon are exemplary in the region and at international level and the two countries’ role in striking balance and establishing peace in the region is important, evident and constructive,” Ali Akbar Velayati, foreign affairs advisor to Leader of the Islamic Revolution Ayatollah Seyyed Ali Khamenei, said in a joint press conference with Lebanon’s Foreign Minister Gebran Bassil in Beirut on Tuesday.

He added that Iran and Lebanon have deep-rooted historical relations and are cooperating on international scene.

Velayati also emphasized that Iran and Lebanon maintain “fully coordinated relations” at regional and global levels, particularly on international talks about the settlement of ongoing crisis in Syria.

Since March 2011, Syria has been beset by foreign-backed militancy, which has so far claimed the lives of over 250,000 people and displaced millions of others.

Iran has attended two rounds of international talks on the Syrian conflict in the Austrian capital of Vienna over the past two months.

Velayati reiterated that Iran would spare no effort to help the Lebanese government and people.

The Lebanese foreign minister also said the fight against the Israeli regime and terrorism has strengthened ties between Iran and Lebanon.

Bassil expressed confidence that international efforts in the region and the strong stance of Iran and Lebanon would end in victory against terrorists.

He said Lebanon would strongly repel the danger of terrorism by reinforcing national unity and contribution to restoration of stability.

Velayati arrived in the Lebanese capital on Monday at the head of a high-ranking delegation to hold talks with the country’s officials on the issues of mutual interest.

Earlier in the day, he held talks with Secretary General of Lebanon’s resistance movement Hezbollah Seyyed Hassan Nasrallah in Beirut.