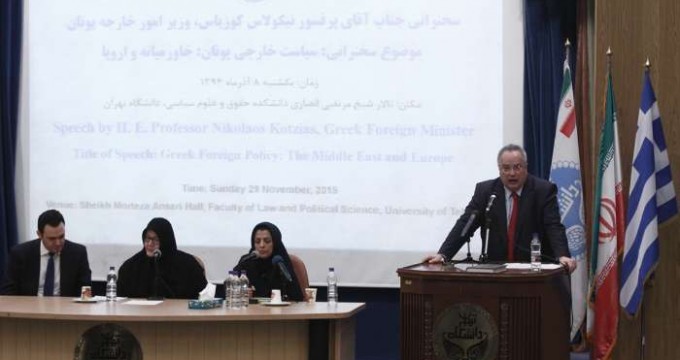 He made the remarks on the sidelines of a ceremony in the Tehran University.

Kotzias said guns should be silenced and diplomacy should start working.

He added shooting down the Russian warplane would not help establishing peace in the region.

Kotzias arrived in Iran for a two-day visit on Sunday.

He is accompanied by Deputy Foreign Minister Dimitris Mardas in charge of economic affairs, Deputy Industry Minister Theodora Tzakri and a delegation of Greek businessmen.

On Sunday, Kotzias will be received by President Hassan Rouhani and will have a meeting with Iranian Foreign Minister Mohammad Javad Zarif which will be followed by a press conference.

Kotzias will then meet with the Speaker of the Iranian Parliament Ali Larijani and attend an event at the Greek Embassy with the members of the Greek business delegation and Iranian officials and entrepreneurs in attendance.

On Monday he will meet with Oil Minister Bijan Namdar Zangeneh and Roads and Urban Development Minister Abbas Akhoundi.