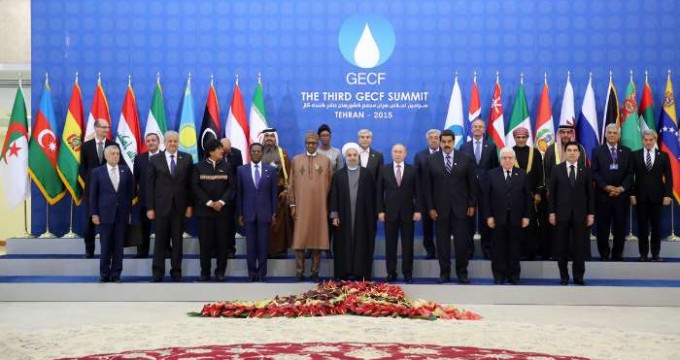 Tehran, November 29, The Iran Project – GECF summit  in Tehran and participation of foreign countries, massive rally of millions of Iranians toward the holy city of Karbala and the conference unveiled new oil contracts in Tehran dominated Iran’s media outlets in the past week (Nov.23-Nov.29). Nigeria can be the center of regional cooperation in Africa, Foreign Minister Mohammad Javad Zarif said here Monday. Zarif made the remarks in a meeting with his visiting Nigerian counterpart Geoffrey Onyeama. Iranian President Hassan Rouhani on Tuesday called for the development of economic ties between Tehran and Algiers, saying the current level of ties is not at all acceptable given the existing potentials.

Russian President Vladimir Putin arrived in Tehran on Monday to attend the summit meeting of the Gas Exporting Countries Forum (GECF) and to discuss the Syrian crises with Iranian officials. Russian President Vladimir Putin and Supreme Leader of the Islamic Revolution Ayatollah Seyed Ali Khamenei held a meeting here in Tehran on Monday during which Putin gifted one of the world’s oldest Quran manuscripts to Imam Khamenei.

Iran unveiled the newest achievements of the Navy in a ceremony on Monday attended by Army Deputy Commander-in-Chief Abdol-Rahim Mousavi and Iranian Navy Commander Habibollah Sayyari. The third Summit of Gas Exporting Countries Forum (GECF) opened in Tehran on Monday afternoon at the presence of President Rouhani.

Russian President Vladimir Putin met with his Iranian counterpart Hassan Rouhani in Tehran on Monday, November 23. Rouhani deemed the nuclear issue as one of the common grounds between the two countries adding “for many years, Iran and Russia have had good relations in the field of nuclear energy and today these relations will develop.” President Hassan Rouhani attended a press conference on the sidelines of the third GECF Gas Summit, on Monday afternoon, and answered the questions of local and foreign media reporters. Iranian President Hassan Rouhani met with world leaders in the third summit of GECF, started on Monday at the Summit Conference Hall in the Iranian capital city of Tehran.

The 3rd GECF summit is a biennial Gas Exporting Countries Forum summit, an international relations conference attended by the heads of state or heads of government of most member states of the GECF.

Speaking in a meeting with a high-ranking Bolivian delegation headed by President Evo Morales in Tehran on Tuesday, President Rouhani described the South American country as a friend and a revolutionary nation and said Iran is willing to boost ties with Bolivia.

In a meeting with visiting Minister of Foreign and European Affairs of Luxembourg, Jean Asselborn in Tehran on Wednesday, he said: “Iran, with its distinctive regional circumstances, and Luxembourg, as an important center for financial affairs and investments, should expand their existing mutual ties”.

In a meeting with the Foreign Minister of Kazakhstan, Erlan Idrissov on Wednesday President Rouhani described Kazakhstan as a brother and friend country in the region. Parliament Speaker Ali Larijani had a meeting with Luxembourg Minister for Foreign and European Affairs Jean Asselborn on Wednesday evening. A group of Iranian Basij (volunteer) forces met with Supreme Leader of the Islamic Revolution Ayatollah Seyed Ali Khamenei, who is also the country’s Commander-in-Chief, in Tehran on Wednesday.

Pilgrims who are walking to celebrate the 40th day after the martyrdom anniversary of Imam Hossein (AS), visited Mosque al-Kufa and Imam Ali’s house on their way to the holy city of Karbala in Iraq. A large group of Iranian people attended the funeral procession held for the country’s former ambassador to Lebanon, Ghazanfar Ronkabadi, who was killed during a recent crush of people in Mina, Saudi Arabia, in this year’s Hajj pilgrimage.

The Iranian oil ministry on Saturday inaugurated the Tehran Conference here in the Iranian capital to introduce a new model for oil contracts called Iran Petroleum Contracts (IPC) to be signed after the termination of anti-Iran sanctions.

The 15th edition of Resistance Theatre Festival introduced the winners on Saturday evening in a ceremony held in Tehran. Supreme Leader of the Islamic Revolution Ayatollah Seyyed Ali Khamenei received the commanders and staff members of the Iranian Navy on Sunday.