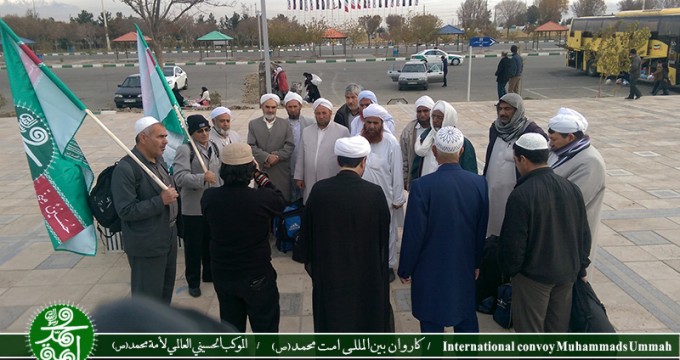 A convoy of Sunni pilgrims heads toward Karbala along with Shias

Tehran, November 29, The Iran Project– Along with millions of Shia Muslims who are taking part in massive march toward the holy city of Karbala, the first caravan of Iranian Sunni Muslims is heading toward Iraq to attend one of the largest annual gatherings of Shia Muslims in Iraq.

According to MWF press, the group initially attended the Imam Khomeini shrine near Tehran and then moved toward Iraq to join millions of other Muslim mourners who have entered Karbala on foot to commemorate 40 days after the martyrdom of Imam Hussein (AS).

The caravan includes tens of Sunni clerics, elites, cultural and social activist, poet and athletes from Sistan and Baluchistan and Golestan provinces.

According to the organizers, showing devotion to the noble values of Imam Hussein and his global message and cause are among the purposes behind this move.

Sunni Muslims individually took part in Arbaeen ceremony in past years, but this is the first time they join a group to attend the mourning ritual.

Arbaeen annually attracts millions of Shia Muslims from different countries who walk tens of miles barefoot to show their commitment to the Shia imam.

Iraqi official announced that the number of Arbaeen pilgrims reportedly hit more than 17 million in 2014.