A look at Iranian newspaper front pages on Nov. 24

The gathering of the leaders of gas-producing countries in Tehran for a GECF summit and the meeting between the Supreme Leader and the visiting Russian president dominated the front pages of Iranian newspapers on Tuesday.

Ettela’at: The US has long-term plans to dominate West Asia, said the Supreme Leader at a meeting with Russian President Vladimir Putin.

Highlights of Ettela’at newspaper on Nov. 24 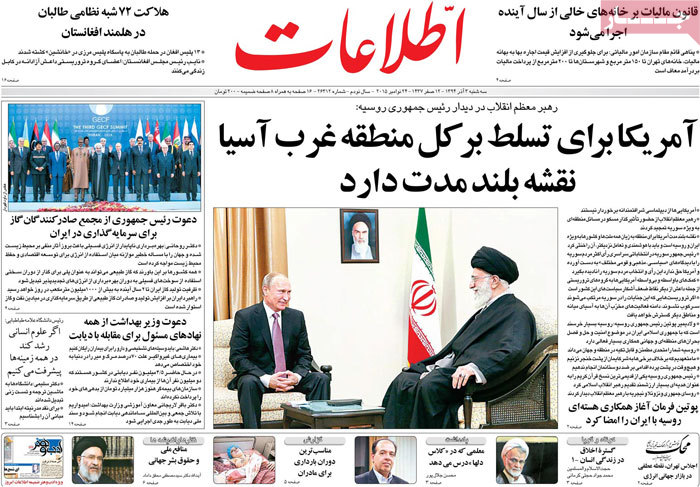 Abrar: A delegation of Russian businessmen will arrive in Iran within a month to hold talks over $21 billion in exports. 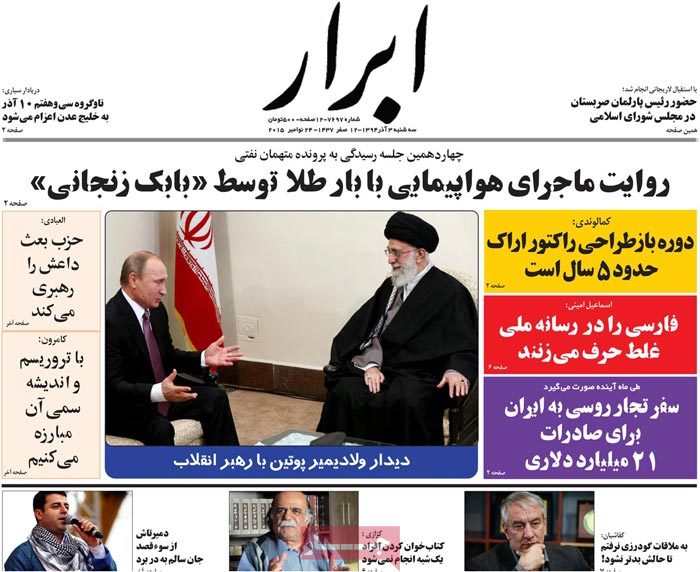 Arman-e Emrooz: A cholera advisory has been issued for Iranian pilgrims who are about to cross the border into Iraq [to take part in ceremonies marking Arba’een].

The Iranian pilgrims have also been warned that traveling to Iraq without a valid passport may land them in prison for six months. 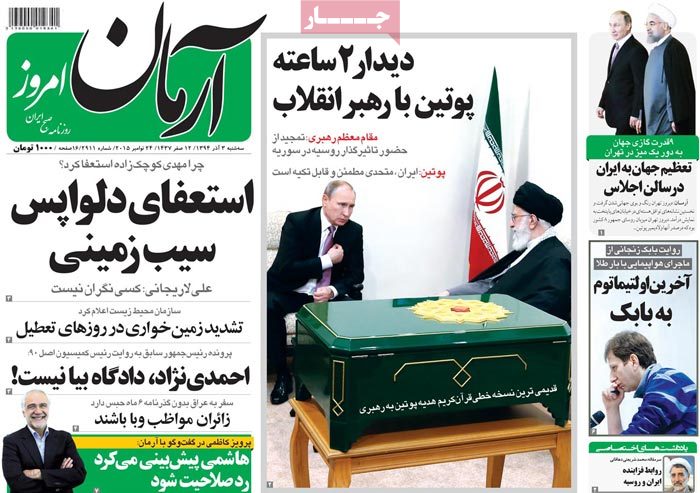 Asr-e Iranian: Russian President Vladimir Putin: Iran is a reliable ally in the region and the world. 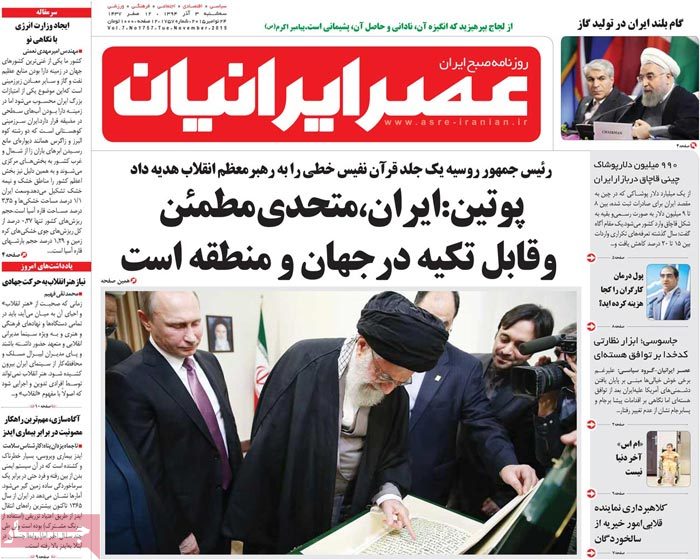 Asr-e Rasaneh: The Dutch are ready to invest in Iran.

The announcement came at a meeting between the Iranian economy minister and his Dutch counterpart in Tehran. 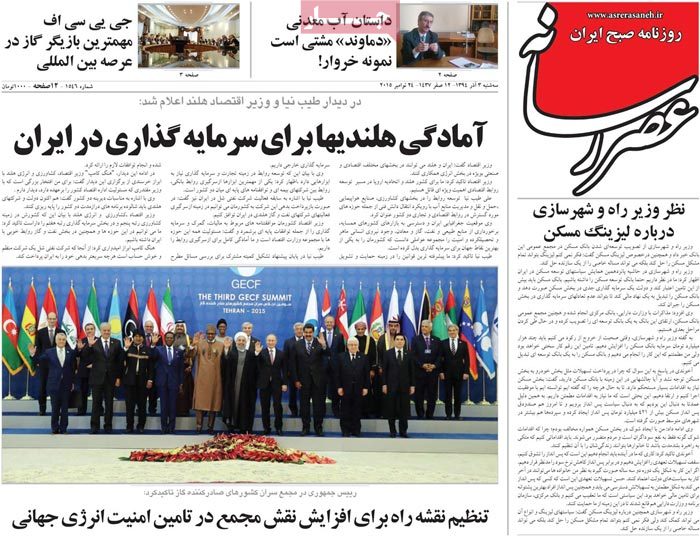 Asrar: A spokesman for the Interior Ministry has said that there will be no more replacements of provincial governors. 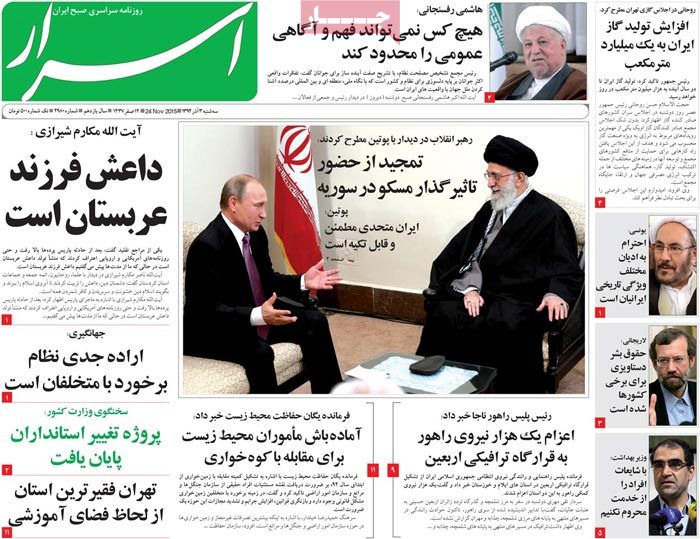 Bahar: Parliament has given a lukewarm welcome to plans to make elections transparent.

As many as 58 MPs voted against the double-urgency status of a bill that will eventually render electoral campaign financing transparent. 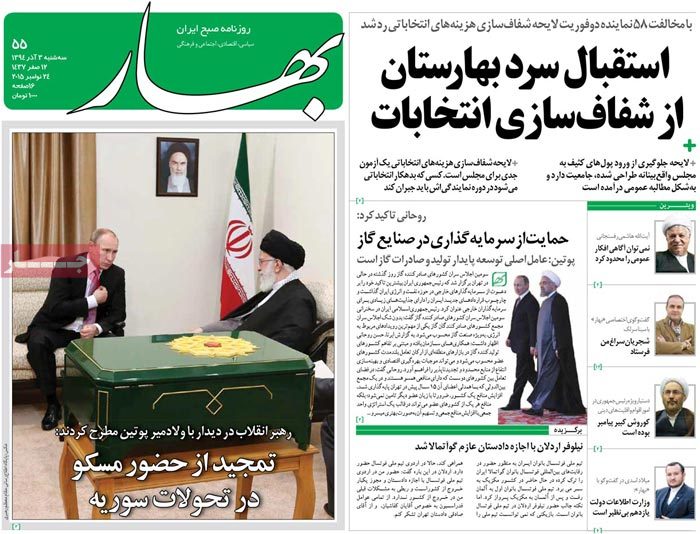 Ebtekar: Tehran became the gas capital of the world when it hosted a summit of the Gas Exporting Countries Forum on Monday. 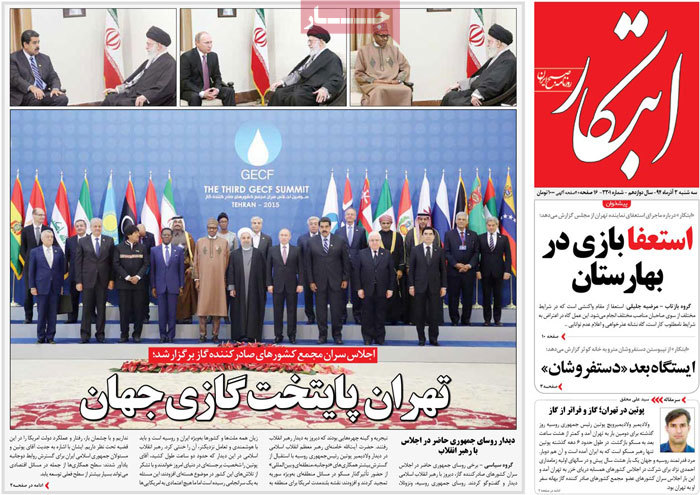 Etemad: President Putin has presented a handwritten Koran to the Supreme Leader. 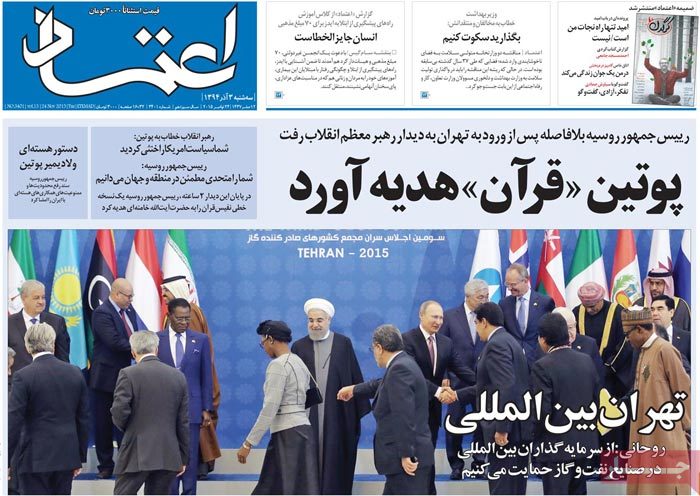 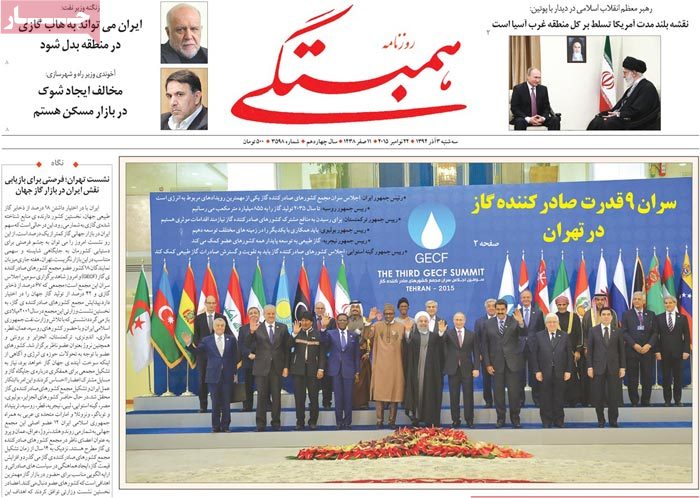 Hemayat: The United Nations supports countries that do others injustice, said the Judiciary chief as he recalled anti-Iran and anti-Syria resolutions recently adopted by the UN. 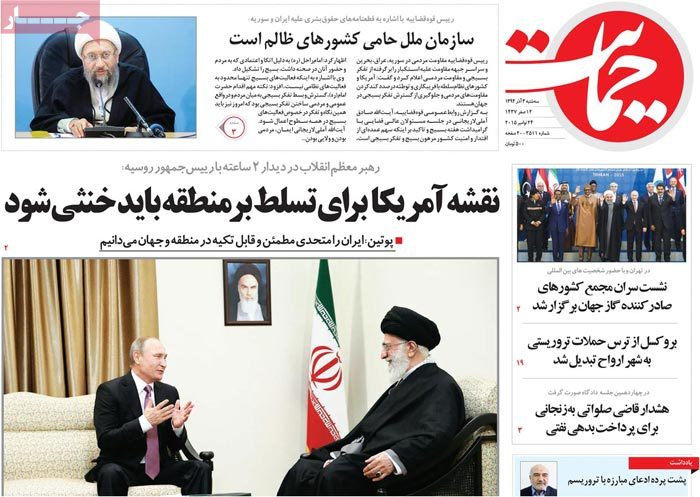 Javan: In a two-hour meeting with President Putin, the Supreme Leader has urged interaction between Iran and Russia to “foil American plots”. 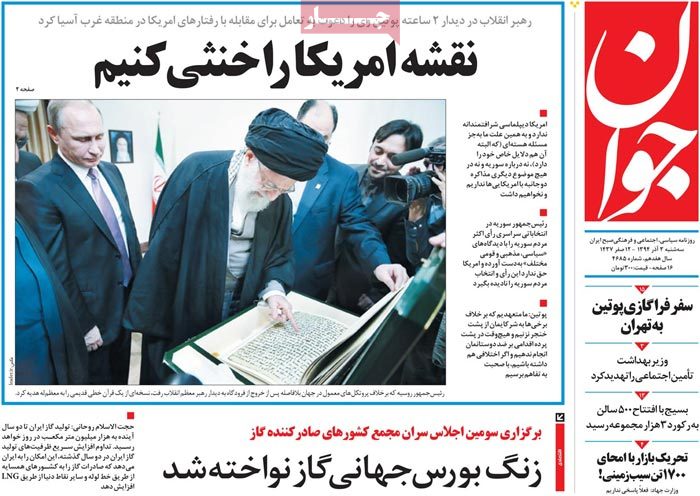 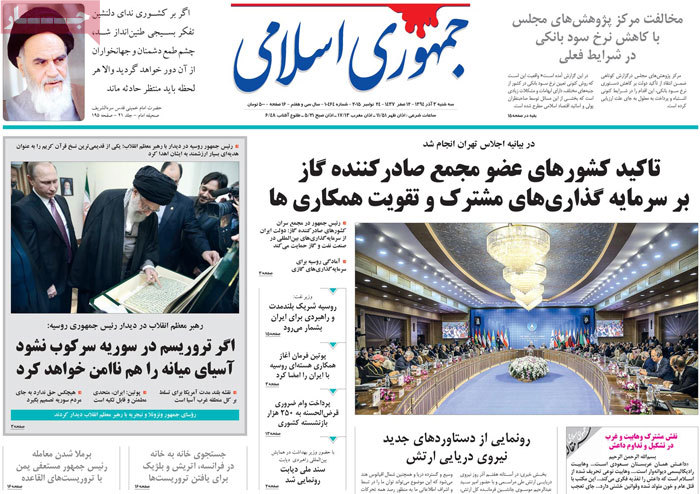 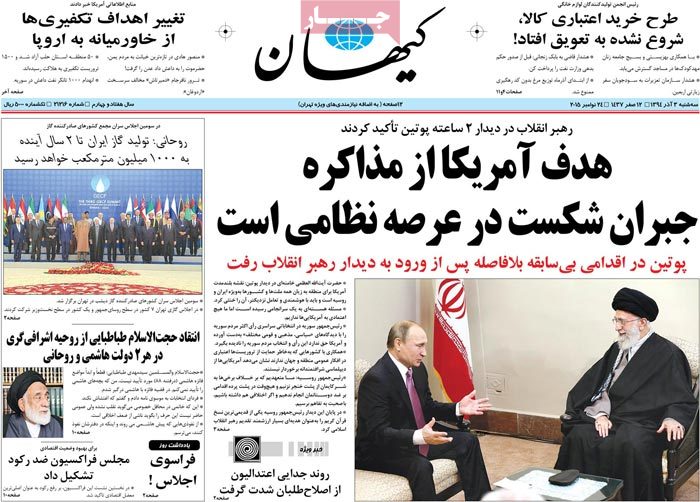 Mardomsalari: No one can limit the understanding of the public, said Chairman of the Expediency Council Ayatollah Akbar Hashemi Rafsanjani. 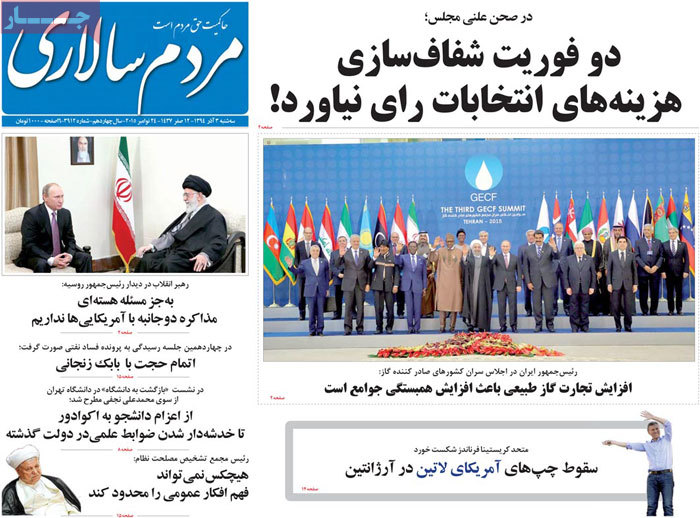 Payam-e Zaman: The economy minister has said that inflation will slip into single digits in less than a month. 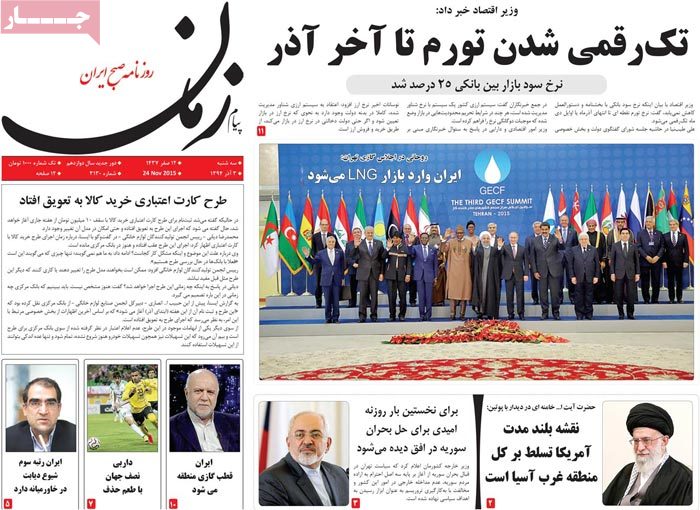 Resalat: The presiding board of the National Security and Foreign Policy Committee of the Islamic Consultative Assembly has been tasked with supervising the implementation of the Joint Comprehensive Plan of Action, said the chairman of the parliamentary committee. 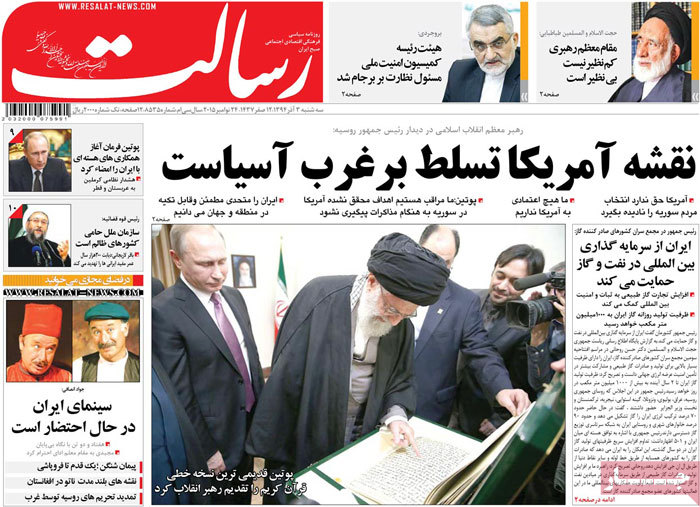 Roozan: The judge presiding over the corruption trial of Babak Zanjani [the so-called oil billionaire] has advised the defendant to pay back his debts [to state institutions] before a verdict is issued in the case.

Setareh Sobh: Mehdi Koochakzadeh shouted, tendered his resignation and walked out of an open session of the Islamic Consultative Assembly on Monday.

[The principlist MP was protesting the alleged dumping of 1,700 tons of potatoes to prevent a drop in prices.] 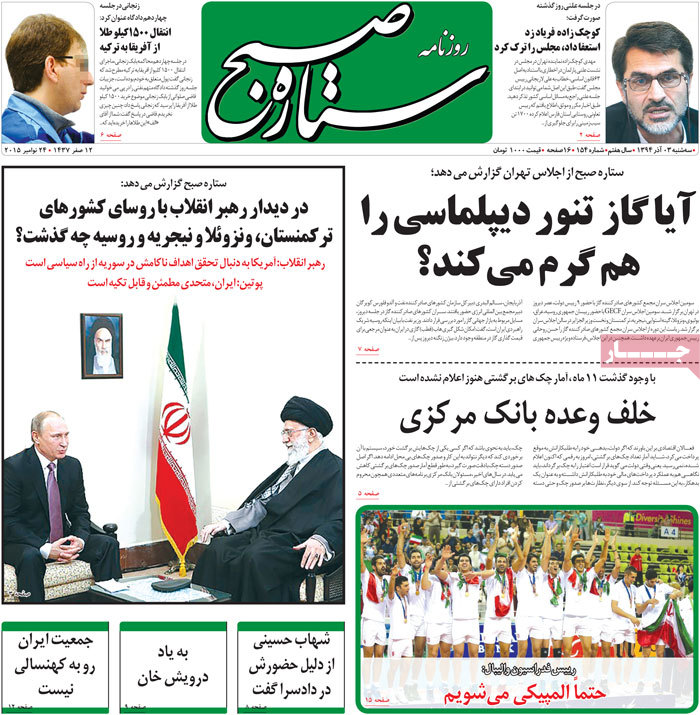 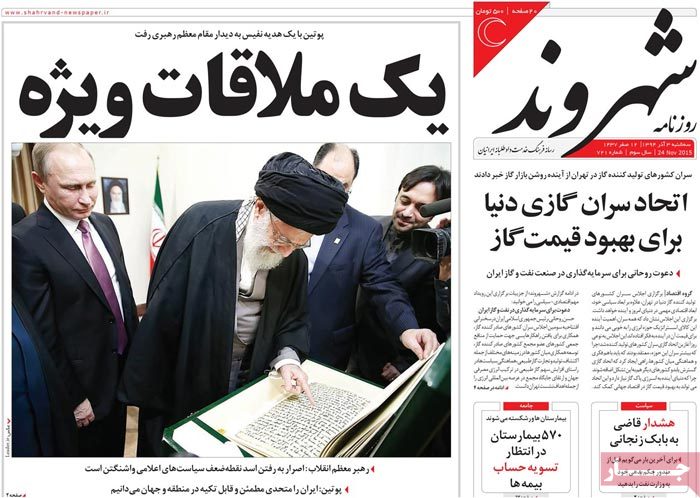