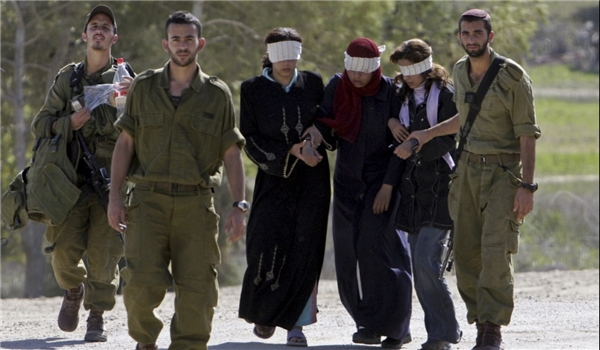 Alwaght- The Israeli regime is holding 40  Palestinian women in its notorious prisons, the head of the Palestinian Authority Committee for Prisoners’ Affairs said Saturday.

He said that six female prisoners also remained wounded after they were shot by Israeli regime forces at the time of their arrest. These were Shurouq Dwayyat, Hilweh Hamamreh, Israa Jaabis, Marah Bakir, Istabraq Nour, and Amal Taqatqa.

Over 15,000 Palestinian women, including minors, moms, students, and lawmakers, have been arrested by Israeli regime forces since the regime occupied the Gaza Strip and the West Bank in 1967, updated statistics revealed.

Palestinian women in notorious Israeli regime jails are subjected to inhuman and degrading treatment, torture, and psychological abuse throughout the process of their detainment.

They have to endure weeks, sometimes months, of torture at one of Israel’s interrogation centers to extract confessions from them before being transferred to central prisons.

Palestinian women prisoners suffer from beatings, insults, threats, sexually explicit harassment and sexual violence, and humiliation at the hands of Israeli guards. Often they are forced to undergo degrading body searches during the middle of the night for no reason other than a punitive measure.

This report comes just one day after the Palestinian Prisoners’ Society (PPS) said in a statement on Friday that nearly 400 Palestinian children ranging from 13 to 17 years old are currently being held in Israeli jails. Most of the children had been arrested by Israeli forces across the occupied Palestinian lands since the beginning of October.

The statement said all children captured by Israeli troops were subjected to different types of torture and forced to make confession through physical and verbal coercion.

More than 7,000 Palestinian prisoners are currently held in some 17 Israeli jails, dozens of whom are serving multiple life sentences. About 540 Palestinians are being held without trial under the so-called administrative detention.

Administrative detention is a sort of imprisonment without trial or charge that allows Israel to incarcerate Palestinians for up to six months. The detention order can be renewed for indefinite periods.