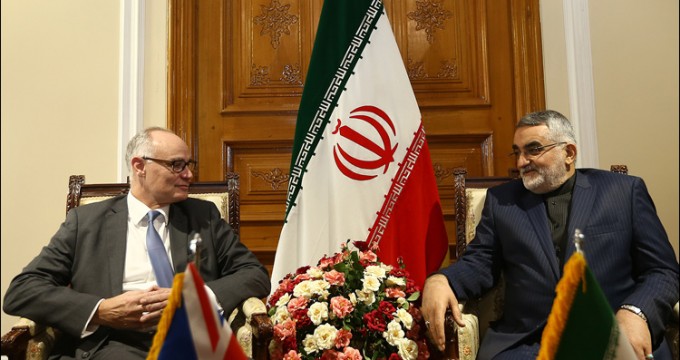 Tehran, Nov 21, IRNA – Head of Parliament’s National Security and Foreign Policy Commission Alaeddin Borujerdi on Saturday criticized British Embassy for refraining from issuing visas to Iranian citizens after its reopening in Tehran, asking that embassy to facilitate services to Iranians.

Borujerdi made the demand in a meeting with visiting member of the British House of Commons Crispin Blunt.

He said that the reopening of the British Embassy in Tehran following Iran’s nuclear deal with six world powers, known as the JCPOA (Joint Comprehensive Plan of Action) during a visit of the British foreign secretary and the Iranian Embassy’s reopening in London all in all call for faster issuance of visas to Iranian citizens.

‘The Iranian nation’s public opinion is still very sensitive to the British government and to some extent is negative and that is why the British statesmen and women should adopt effective and constructive moves during the new round of bilateral ties to reconstruct the current negative image in the Iranian nation’s mind,’ said Borujerdi.

He meanwhile condemned the Daesh terrorist group’s criminal acts in France, arguing that Daesh is today a serious threat to global peace and stability, reiterating that Iran condemns all types of terrorism everywhere in the world.

Borujerdi also reminded the British MP that Daesh which has been committing countless crimes in such countries as Syria, Iraq and elsewhere in the region has been created, armed, financed and trained by the West and some reactionary Western allies.

Crispin Blunt, too, expressing delight with his travel to Iran said that the Iranian civilization is a great and noticeable one in the world, voicing the global community’s expectation from Iran to play a more effective and constructive role in international equations and developments.

‘The main objective of the British House of Commons in dispatching nine separate delegations to various regional countries is to share viewpoints and harmonize the international campaign against Daesh and all other active terrorist groups in the region,’ he added.