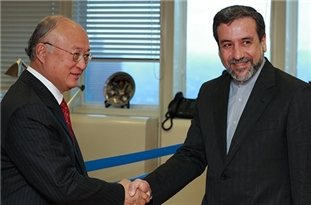 Araqchi, who has undertaken leadership of JCPOA implementation follow up department will go to Vienna on Tuesday to confer with Yukiya Amano.

On the other hand, US Coordinator for implementing Iran’s nuclear deal Stephen Mull is departing US for Vienna on Sunday to consider implementing process of JCPOA with other representatives from Group 5+1.

Representatives of Group 5+1 will also make coordination with IAEA.

One of obligations of G5+1 upon JCPOA is to compile and present a draft resolution to IAEA Board of Governors to close Iran’s dossier forever.

Simultaneously with Araqchi presence in Vienna, a team of Iranian experts will hold the last round of talks with IAEA on Tuesday November 24 to reach final conclusion on the past issues.

Iran’s permanent representative in the agency Reza Najafi will lead the team.

Deputy Director General of IAEA and Head of Safeguards Department Varjoranta will lead the agency team for the negotiations.

One week after the negotiations on December 1, the agency will present its report on resolving the outstanding issues to members of Board of Governors and then the board has 10 to 14 days to consider the report.

Members of Board of Governors will offer their views on Iran’s nuclear program on December 15, 2015.