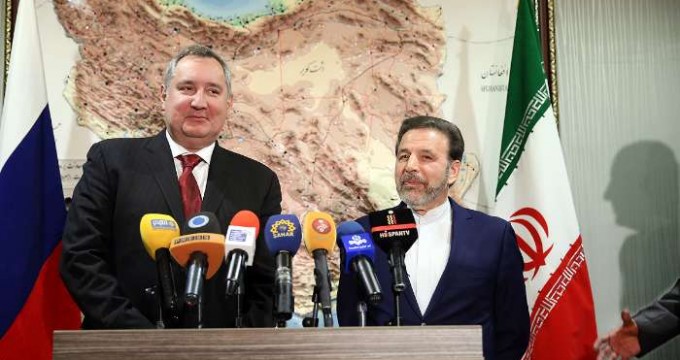 Iran, Russia cooperation documents to be inked during Putin’s visit

Russian Deputy Prime Minister Dmitry Rogozin, who arrived in Tehran on Tuesday to discuss promotion of mutual cooperation between the two countries, said after a meeting with Vaezi, the Iranian head of Joint Iran-Russia Commission, that Tehran-Moscow mutual collaboration will improve.

Rogozin further noted, ‘The more we take steps in line with boosting Iran-Russia ties, the more we understand to have a lot to do.’

He also said that during his visit to Tehran and Isfahan, he learnt a lot during the time which he did not know about them earlier.

‘I am sure that the Iranians are not fully aware of Russians’ potentials and that’s for the same reason that during the talks, necessary agreements were made to further support the involvement of experts in both countries’ industries,’ he said.

Sisterhood contract between Tehran and Saint Petersburg was also concluded following the approval of the joint commission’s approval, the Russian senior official said.

Support to businessmen can play a crucial role in the expansion of Iran-Russian ties, he said.

Vaezi, for his part, said that some five to eight cooperation agreements will be signed during President Putin’s visit to Tehran to attend the upcoming Gas Exporting Countries Forum (GECF).

Noting that Russia has a large market, he said that given the problems arisen between the country and Europe, Russian doors are open to Iranian exports.

Vaezi described Iran-Russia ties as ever increasing, hoping that cooperation in the economic, technical and cultural fields will improve to the level of political ties.

Referring to terrorist attacks in Paris, the Iranian minister said that Iran has always opposed to extremism and terrorist groups including Taliban and ISIL.

ISIL poses a great danger to regional and international security, Vaezi said, noting that since Iran is a victim of terrorism, it was against the group from the beginning.

Iran and Russia are in confrontation with ISIL practically and have good cooperation in the campaign against terrorism, he said.