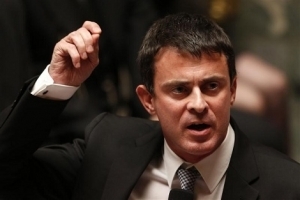 French PM warns use of chemical war against ISIS by France

France could face the risk of CHEMICAL war in its fight back against ISIS extremists, the prime minister has warned.

As French President Francois Hollande called for a “large coalition” to “annihilate” ISIS in the wake of last week’s Paris terror attacks, the country’s prime minister warned the “macabre imagination of the masterminds is limitless”.

Prime Minister Manuel Valls told parliament: “We must not rule anything out. I say it with all the precautions needed. But we know and bear in mind that there is also a risk of chemical or bacteriological weapons.”

In a speech in the lower house of parliament meant to gain approval to an extension of the state of emergency, he told MPs that “terrorism hit France, not because of what it is doing in Iraq and Syria, but for what it is”.

He added: “What is new are the ways of operating; the ways of attacking and killing are evolving all the time.

“The macabre imagination of those giving the orders is unlimited. Assault rifles, beheadings, suicide bombers, knives or all of these at once.”

Mr Valls called on Europe to adopt measures on sharing information about airline passengers as a way of protecting collective security.

It comes after Hollande warned military operations in the Middle East would be intensified in just days after it launched attacks on ISIS destroying a number of targets.

Speaking just five days after 129 people were killed in the Paris atrocities, Hollande told the nation “we are at war” and promised there would be increases recruitment for both the judiciary and police forces.
By Al Alam