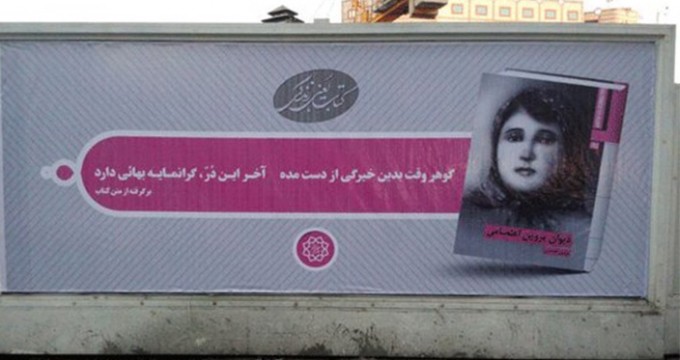 On the occasion of the 23rd National Book Week (November 14-21), 50,000 square meters of billboards and advertising space in Tehran has been allocated to quotations and pictures from the books of major Iranian authors, in a move to promote book reading.

Head of Tehran Beautification Organization Isa Alizadeh said, “One of the tasks of the TBO is to make use of commercial space in the city for cultural objectives,” Mehr News Agency quoted him as saying.

A total of 250 popular and useful books by Iranian and foreign authors as well as winners of different local festivals and competitions have been selected to go on billboards and other structures, designated as a rule for commercial advertisements, for the week-long project.

Along with the quotations, images of book covers, manuscript pages and reputable libraries in the country are also seen.

With the slogan ‘Reading is Living’, the initiative aims at promoting book culture among the public and encouraging families to buy more books, which in effect will result in a thriving book publishing market.

Prior to this, the TBO had replaced 1500 billboards in Tehran with copies of famous artworks by Iranian and western artists for 10 days in May to improve the appearance of parks and public spaces, turning the capital city into a huge art gallery.

In cooperation with the cultural department of Tehran Urban & Suburban Railway Operation Co., short video ads for the books are being played on subway car monitors.

Another program, launched in the National Book Week, was equipping 14 inter-city passenger trains with a library.

According to a memorandum of cooperation signed between the Raja Rail Transportation Company and the Ministry of Culture and Islamic Guidance, trains on routes between major cities like Tehran, Mashhad, Tabriz and Shiraz now have libraries with 500 books each.

Running book fairs, conferences, movie screenings, specialized sessions with experts and book unveiling ceremonies are among the programs underway across the country during the week.