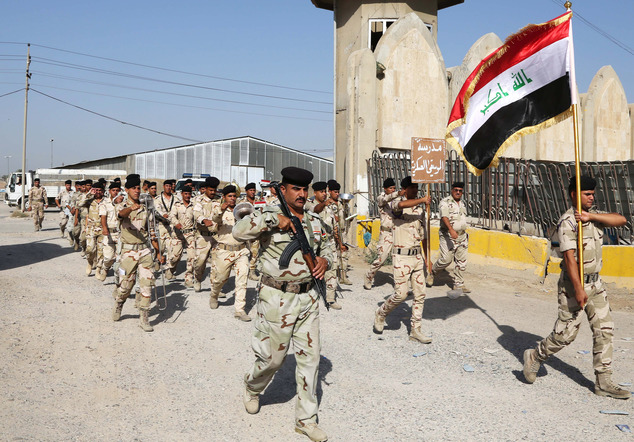 Sinjar liberation from ISIS; event of strategic or symbolic significance?

Alwaght- Iraqi Kurdistan region’s Security Council has announced on its Twitter on Friday that the Peshmerga forces entered Sinjar region. Sinjar is a region mostly populated by Kurds and located in northeastern Iraq. It is historically inhabited by Yazidi Kurds, but minorities from Assyrians and Sunni Arabs also live in the region. Administratively, Sinjar is part of Iraq’s Nineveh province.

Being 140 kilometers away from Iraq’s Mosul, Sinjar town is located in west of the Iraqi Kurdistan region. Currently the town is one of points of dispute between Iraq’s central government and the Kurdish region. The dispute is triggered by the Article 140 of the country’s constitution.

The ISIS terrorist forces have captured Sinjar in august, 2014 by carrying out suicidal operations and after retreat of the Peshmerga forces from the town. ISIS committed a big crime in Sinjar as it slaughtered hundreds of Yazidi Kurds and enslaved thousands of Yazidi women from the town. After several months of planning for regaining Sinjar from the terrorists, the liberation operation has begun at 7 a.m on Thursday November 12. About 7,500 Peshmerga forces along with other Kurdish militia forces, with the coalition’s airstrikes support, have taken part in the operation. The liberation operation was codenamed “Melek Taus anger.”

The Kurdish forces attacked ISIS in Sinjar from three fronts. Entering the town from east and west sides, the Kurds have managed to control several strategic roads in the town. The Iraqi news networks quoted the Peshmerga commander Halo Penjiwini as saying that the Kurdish military forces have succeeded in liberating the town, and the ISIS terrorists have retreated from inside the region. Brett McGurk, the US President’s special envoy to Iraq, declared that so-called anti-ISIS coalition has carried out 40 airstrikes on ISIS targets in Sinjar in one day, killing over 70 ISIS terrorists.

Following the Sinjar liberation on Friday, Masoud Barzani, the President of Iraq’s Kurdistan region and the commander in chief of the Peshmerga forces, held an outdoor press conference on the mountains overlooking Sinjar town. He, in a symbolic move, officially announced liberation of Sinjar from ISIS hold, congratulating the Kurdish people, the Yazidi minority, and the Peshmerga forces for the achievement. Barzani’s symbolic gesture came as an attempt to restore the downgraded prestige of Kurdistan Democratic Party after last year’s Peshmerga force’s retreat from Sinjar and leaving the town fall to ISIS.

Commenting on Sinjar liberation operation, Peter Cook, the Pentagon’s spokesman, has said that the operation would continue for one to two weeks, and the coalition’s forces would keep providing support for Peshmerga forces by their airstrikes.

Sinjar’s importance can be considered in various issues:

– Firstly, Sinjar is located on the road linking Raqqa in Syria and Mosul in Iraq. Controlling Sinjar would block easy access and traffic of ISIS between Raqqa and Mosul, two pivotal cities held by the group. Consequently the terrorist group would face difficulty transferring arms between the two cross-border cities.

– Secondly, ISIS would be put in a risky and vulnerable situation in Iraq’s Mosul once Sinjar in Iraq is held by Peshmerga and the Kurdish populated areas in Syria are held by the Syrian democratic forces. This condition could prepare the ground for launching an offensive position to liberate Mosul. Peshmerga’s entrance in Sinjar represents a major step to regain other cities from ISIS terrorists.

– Fourthly, Defeating ISIS would reduce the heavy criticism on the Kurdish forces, especially the Peshmerga forces that came under fire and were recognized responsible for fall of Sinjar after their retreat from the town.

Presenting a round-the-clock coverage for the Sinjar liberation operations, the foreign media have commented on the details and significance of the offensive. CNN reported that the Kurdish Peshmerga forces have unblocked the way connecting Raqqa and Mosul. This was the major objective at the first day of the operation, CNN added. A Peshmerga commander said that about 600 of the ISIS terrorists who were present in Sinjar were tasked with planting bombs in the town, CNN continued.

While having a strategic importance, Sinjar is of symbolic significance, and beside its ritual importance for the Yazidi Kurds, it is the only disputed city in Article 140 which is out of Kurdish control, BBC reported.

Wall Street Journal noted that one night before launching the ground attack on Sinjar, the so-called anti-ISIS coalition’s air forces had carried out several airstrikes on the ISIS positions in the town to clear the way for the ground attacks.

Also, Aljazeera said that in addition to the foreign coalition’s airstrikes, the Peshmerga forces, the Syrian People’s Protection Units and Turkey Kurdistan Workers’ party (PKK) have taken part in the combat mission.

The liberation battle of Sinjar continued from the western front of the region, NRT in Kurdistan region quoted Amid Fakher, a Peshmerga senior commander, as saying. In other news NRT added that taking full control of the town and returning the Yazidis, who fled the town after ISIS capture, after removing the planted bombs, was the ultimate goal.

Sinjar in the heart of local conflicts

There are two key issues about Sinjar’s future after liberation. First, already being a point of dispute between Baghdad and Erbil triggered by the country’s Article 140 of constitution, Sinjar could, in short run, add to the fragility of ties between Iraq central government and the Kurdistan region. This could prepare the grounds for forthcoming clashes between the two sides, because it is unlikely that the Kurdish forces would leave the town for central government’s forces to be stationed there.

Second, following fall of Sinjar to ISIS, the PKK forces have stepped up their military presence and political activities in the region. This move weakened the political base of Kurdistan region’s authority among the Yazidi Kurds and on the other hand boosted the PKK’s position among them. Having in mind the tense historical conflict between PKK and Kurdistan Democratic Party, with leadership of Barzani, it is probable to elevate tensions between the two sides.