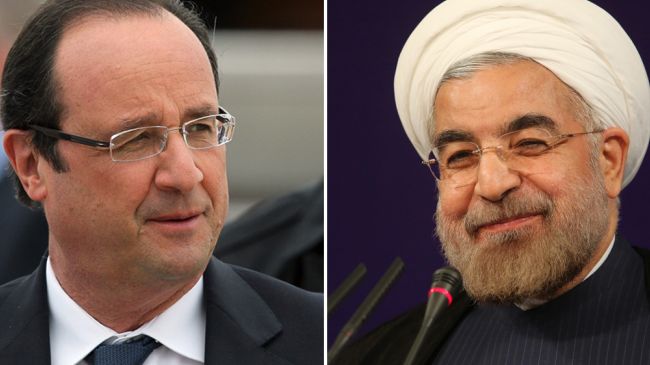 Iranian President Hassan Rouhani has held a phone conversation with his French counterpart Francois Hollande, stressing unity against terrorism in the wake of the recent terrorist attacks in the French capital of Paris.

On November 13, a string of coordinated attacks in and around Paris left more than 130 people dead and some 350 others injured.

Planned trips by President Rouhani to three European destinations, including France, were cancelled following the spate of the deadly terror attacks.

Condemnations and expressions of sympathy poured in for the French government and people over the attacks.

President Rouhani sent a message to the French president, condemning the assaults.

Other countries, including the United States, Russia, Britain, Germany, Spain, India, Australia, and Turkey, as well as the European Union (EU) voiced their condemnation of the attacks.

According to the Twitter post, the presidents of Iran and France emphasized the need to unite and create a World Against Violence and Extremism, a set of proposals put forth by President Rouhani at the United Nations (UN) in 2013.

Back then, the Iranian president presented the proposals during an address to the 68th session of the UN General Assembly in New York. In December that year, the UNGA overwhelmingly voted to approve a resolution based on the WAVE. The resolution calls on all nations across the globe to denounce violence and extremism.