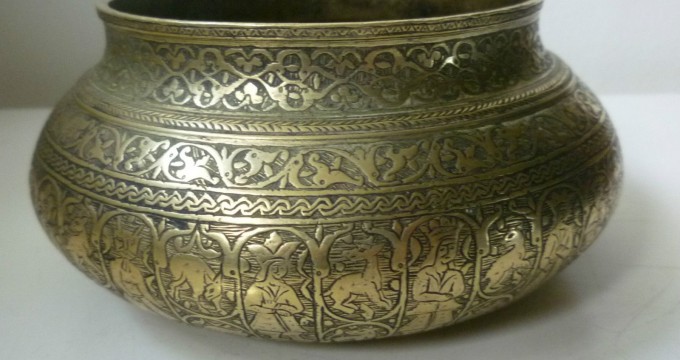 Art of engraving in Iran is unique like Persian carpet, researcher says

TEHRAN — The engraving artworks in Iran are just as exquisite and unique as Persian carpet, art expert and researcher Mohammad Hassan Golchinpur said on Sunday.

Golchinpur made the remarks as he attended a ceremony during which his bilingual book “Iran’s Art of Engraving: Icons of Today, Legends of Tomorrow” was unveiled.

The book, which is in Persian and English, is released by the Sokhan Publication.

“I have conducted several researches on engraving artworks produced in other parts of the world, however Iranian engraving is one of the most genuine ones,” Golchinpur explained.

Engraving is defined as the art of craving delicate designs on metal; and in Iran has always been done with special methods and adorn with traditional designs. It is done on different metals such as copper, brass, silver, gold and also some alloys.

“I began to compile the book since 1983 with the help of my daughter Negin,” he said.

“We have taken pictures from artists in 1983 and talk with them about their art. However we have to provide some pictures of their unique works in the book, which take a lot of time,” he remarked.

“I was introduced with the art of engraving through Master Ali Mohammad Parvaresh who knew history of this art very well.”

Engraving masters are inborn artists who have no academic education about this kind of art, Golchinpur said.

“Many of past generation masters are not known today because they are not introduced in their time so we should introduce talented artists when they are alive,” he added.

One of the prominent artists named Ali Amir-Saei died before the book’s publication.

“The book is not about technical methods of engraving but it is about this kind of art narrated by artist,” he said.

He expressed his thanks to art professor Robabeh-Khatun Pileforush who wrote the first chapter of the book “The Trace of Stylus on the Body of Metal” on history of engraving.

“Engraving artworks are not mere art, but masters have thought about design and innovation in that,” he explained.

“I do hope that today masters are known by art lovers and their works turn into professional brands worldwide,” Golchinpur added.

Master of Persian painting Mahmud Farshchian also penned the introduction of the book.

At the end, Golchinpur expressed his thanks to Natalie Haqverdian and Sam Nafis who translated the book into English.