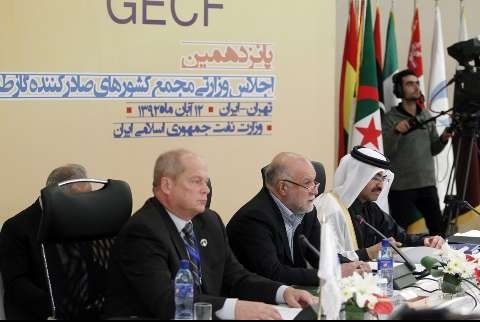 TEHRAN, Nov. 16 (Shana) – Some 15 years have passed since the Gas Exporting Countries Forum (GECF) was founded. The forum has held gatherings in its member states and it did not have any specific secretariat from the very beginning.
The first ministerial meeting of GECF was held in Tehran in May 2001. Called by Iran’s then minister of petroleum, the GECF ministerial meeting was attended by high ranking representatives of Algeria, Brunei, Indonesia, Malaysia, Oman, Qatar, Russia, Turkmenistan and Norway as observer.
During this first ministerial meeting, it was agreed that the objectives of the forum will be to foster the concept of mutuality of interests by favoring dialogue among producers, between producers and consumers and between governments and energy-related industries to provide a platform for research and exchange of views, and to promote a stable and transparent energy market. These and other goals were outlined in a document prepared by the expert meeting and approved by the ministers as a mandate of the GECF.
Databank in 2002
Between 2001 and 2003, the basic structure of the forum consisted of a ministerial meeting as the highest decision-making instance and an expert meeting as a technical advisor. The ministerial meetings were held annually: In 2002 in Algeria and in 2003 in Qatar. The 2nd ministerial meeting in Algiers emphasized the importance of cooperation between producers and consumers to ensure the development of gas industry. Furthermore, the expert meeting was instructed to develop a database of gas projects and contracts terms and conditions and studies such as new gas utilizations and associated costs.
The 15 countries which met in Doha for the 3rd ministerial meeting in 2003 agreed to create a liaison office as a focal point for the gathering of data and for the supervision of GECF projects. This event was also an opportunity to follow up on studies on new gas utilizations, stress the relevance to develop a world supply and demand gas model and evaluate gas pricing.
During the 2004-2006 period, the forum advanced steadily towards the goal of developing a more integrated discussion platform; the 4th ministerial meeting in Cairo, Egypt, and the 5th ministerial meeting in Port-of-Spain. Trinidad and Tobago created the executive bureau (which would transform later into the executive board) and consolidated the liaison office.
In Cairo, the ministers highlighted the importance of fair prices for natural gas and the need for joint investments and research between member countries as a means to enhance cooperation, as well as the necessity to exchange information and data.
The 2005 meeting in Trinidad and Tobago was an occasion to agree on the general framework, the objectives and the structure of GECF (ministerial meeting, executive bureau, experts meeting and liaison office). Furthermore, the ministers decided to start developing the world supply and demand gas model. The ministerial meeting was not held in 2006, but the executive board met in Qatar to continue working on the relevant subjects of the GECF.

Another important issue under discussion was the definition of the position and role of natural gas in the construction of the low-carbon economy, the pairing of gas with the development of alternative energy and the promotion of its environmental advantages.
Between 2009 and 2012, the Executive Board (EB) met 10 times with concrete and fruitful results related to the development of the internal structure of the forum and the strengthening of its capabilities. Furthermore, several meetings of working groups or specialized bodies created in accordance with the statute have contributed in fulfilling the mandates of the ministers in such areas as long-term strategy, 5-year working plan for the secretariat, data reporting mechanism and gas summit.
In 2012, the forum was fully engaged in research and gas market modeling activity. Currently the secretariat is preparing forecasts for the market developments for the short-term on a regular basis and conducting several studies and research projects.
15th Ministerial Meeting in Tehran
The second summit of the GECF was held in Moscow in July 2013. Hosted by President Vladimir Putin, the summit was attended by Algeria, Bolivia, Egypt, Equatorial Guinea, Iran, Libya, Nigeria, Oman, Qatar, Russia, Trinidad and Tobago, United Arab Emirates and Venezuela as well as Iraq, the Netherlands, and Norway as observers and OPEC, IEA and IEF as guest international organizations.
The heads of state and government committed to foster economic growth of natural gas usage, promote the expansion of natural gas utilization in different sectors, and encourage GECF dialogue with all market players and stakeholders.
In November 2013, the 15th ministerial meeting of the GECF was held in Tehran under the chairmanship of Iran’s Minister of Petroleum Bijan Zangeneh, President of the ministerial meeting, and Mohammad Bin Saleh Al-Sada, the minister of energy and industry of Qatar, as alternate president. In his opening remarks, the president of the ministerial meeting gave an overview of developments in the gas markets and outlined challenges facing the GECF and its member countries. The ministers appointed Mohammad Hossein Adeli of Iran as the secretary general of the forum for a period of two years.
In 2014, Adeli commenced his tenure as the second secretary general of the GECF for a tenure of two years in accordance with the GECF statute.
Adeli is currently embarking on a number of new initiatives and activities such as the Monthly GECF Lecture Series and other similar activities to transform the GECF to a credible internatio