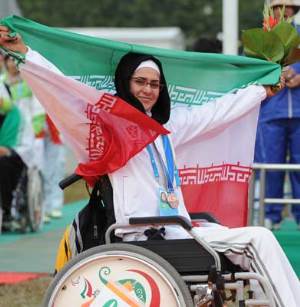 TEHRAN (Tasnim) – Zahra Nemati from Iran on Saturday seized a gold medal in the Asian Para Archery Championships 2015 in Bangkok, Thailand.
The Iranian archer finished in first place with 647 points in the women’s individual recurve.

Nemati had already secured a historic slot for her country at the Rio 2016 Olympic Games following her performance at the Asian Archery Championships in Bangkok, Thailand, on November 8.

The Iranian duo booked slots at the 2016 Paralympic Games as well.

“I dedicate my success to my wife. I would like to express my gratitude to the coaches who helped me win a place at the Paralympics,” Kakoosh said.