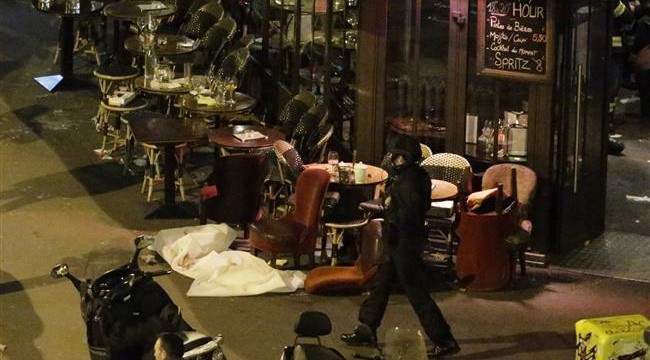 Night of blood and horror in Paris

A string of coordinated attacks in and around the French capital of Paris has left at least 120 people dead and some 200 others injured, as a state of emergency is declared in the European country shaken by the horrific attacks.

Assailants struck at least six different venues, ranging from the national sports stadium to a pizzeria, late on Friday.

There are conflicting reports on the number of the people killed and injured in the attacks. Some reports say as many as 153 people have been killed. The death toll that has been officially confirmed by French authorities but not upgraded for almost a couple of hours stands at 120.

According to some reports, a gunman killed at least 11 people at the Petit Cambodge restaurant in the 10th arrondissement. On the Boulevard de Charonne in the 11th district, 18 others were killed, with one witness saying a Japanese restaurant was the main target.

Three bombings near the Stade de France stadium, one hitting the entrance to the venue, also killed at least five people.

A few hundred meters from the Bataclan concert hall, the terrace of the Casa Nostra pizzeria was targeted. Five people were killed by attackers wielding automatic rifles, according to a witness.

Following the sporadic attacks, nearly 87 people, who had been held hostage by gunmen at the concert hall in central Paris were killed. Witnesses say the terrorists were shooting for 10 to 15 minutes. Officials said eight of the attackers were killed, including three of them who blew themselves up.

Out of the roughly 200 people injured in the attacks, 80 individuals are reported to be in critical health conditions.

A total of eight assailants were also killed in the attacks, most of them by detonating their explosive belts.

The Takfiri Daesh terrorist group has reportedly claimed responsibility for the attacks in and around the French capital.

An extra 1,500 soldiers have been mobilized to reinforce police in Paris, Hollande’s office said. Mayor Anne Hidalgo has also urged residents to stay at their homes.

The coordinated assaults came as France, a founding member of the US-led coalition conducting airstrikes against purported Daesh positions in Syria and Iraq, was already on high alert for terrorist attacks ahead of a global climate conference due to open later this month.

Hollande, meanwhile, cancelled his visit to the summit of the Group of Twenty (G20) international forum in Turkey and will be represented there by Foreign Minister Laurent Fabius and Finance Minister Michel Sapin.

French President Francois Hollande has, meanwhile, declared a state of emergency in a bid to contain the security situation in the country.

“As I speak, terrorist attacks of unprecedented proportions are underway in the Paris area. There are dozens killed, there are many injured. It is a horror.”

He also said France’s borders have been ordered shut following the attacks.

“We must ensure that no one comes in to commit any act whatsoever, and at the same time make sure that those who have committed these crimes should be arrested if they try to leave the country,” the French president said in a brief televised statement.

Meanwhile, condemnations and expressions of sympathy are pouring in for the French government and people.

Iranian President Hassan Rouhani has sent a message to his French counterpart, condemning the attacks.

“In the name of the Iranian nation, itself a victim of the evil scourge of terrorism, I strongly condemn these inhumane crimes and condole with the bereaved French nation and government,” President Rouhani said in his message.

Other countries, including the United States, Russia, Britain, Germany, Spain, India, Australia, and Turkey, as well as the European Union (EU) have voiced their condemnation of the attacks.

The United Nations (UN)’s Secretary General Ban Ki-moon has also condemned the attacks. So has the Vatican.

A number of countries, including China, have also said they are ready to work with France to combat terrorism.

Saudi Arabia, whose preachers officially preach Wahhabism, an extremely intolerant and violent ideology, has also said the Paris attacks show it is necessary to eradicate “threats to global security” through joint international efforts.

In the September 11, 2001 terrorist attacks in the US, 15 assailants out of the total 19 were Saudi nationals.

Paris in the crosshairs

The French capital had been targeted in another series of terrorist attacks as recently as January 7, when gunmen attacked the Paris offices of French magazine Charlie Hebdo, killing 12 people and wounding 11 others.

The incident was followed by a series of sieges and shootings across Paris, resulting in the killing of more people and an extensive sense of insecurity in the country.

In a posthumous video released a few days later, Amedy Coulibaly, a gunman who killed four hostages in another terror attack at a Paris supermarket before he was slain by police, claimed he was acting on behalf of the Daesh Takfiri group in coordination with the two brothers who attacked Charlie Hebdo offices. He said the two brothers, Said and Cherif Kouachi, were affiliated with the al-Qaeda terrorist group.