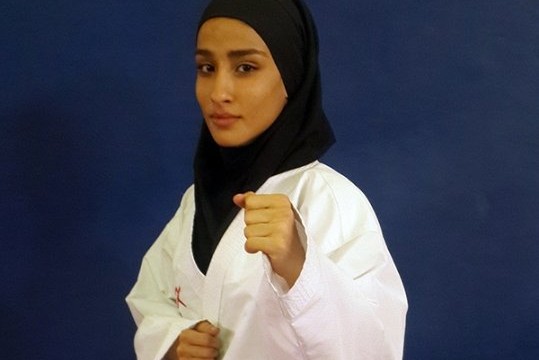 Iranian male and female karate practitioners have exhibited great performances at the ninth edition of World Junior, Cadet & Under 21 Karate Championship in Indonesia, and collected nine medals, including one gold.

On Saturday, Zohreh Barzegar, who had overwhelmed her Chilean, Chinese, Venezuelan plus Hungarian opponents 1-0, 2-1, 3-2 and 5-0 respectively in the march to the final bout of the female minus 55-kilogram U21 kumite division at the Indonesia Convention Exhibition or ICE in the Indonesian capital city of Jakarta, downed a representative from Vietnam 2-0 in the last encounter and clinched the gold medal.

Mi’ad Yari and Ali Asghar Asiabari also scooped up the bronze medal in the female minus 60-kilogram and minus 75-kilogram U21 sections respectively. Mahdi Ghararizadeh settled for the bronze in the junior kumite male minus 76-kilogram category.

The achievements came a day after Iran’s Amir Reza Mirzaei and Ali Meskini and Seyed Ali Karimi knocked out their rivals in the junior kumite male minus 61-kilogram and minus 55-kilogram sections, and stood on the bronze podium.

Additionally, Sara Bahmanyar and Seyed Ali Karimi were awarded a bronze medal in the junior kumite female minus 48-kilogram and cadet kumite male minus 57-kilogram classes.

On Thursday, Iranian sportswoman Fatemeh Sadeghi conceded a 5-0 defeat to a determined athlete from Japan in the final competition of the female junior kata category, and collected a silver medal.

The ninth edition of World Junior, Cadet & Under 21 Karate Championship opened in Jakarta, Indonesia, on November 12 and will wrap up on November 15.

The tournament has brought together 1,441 athletes from 91 countries.