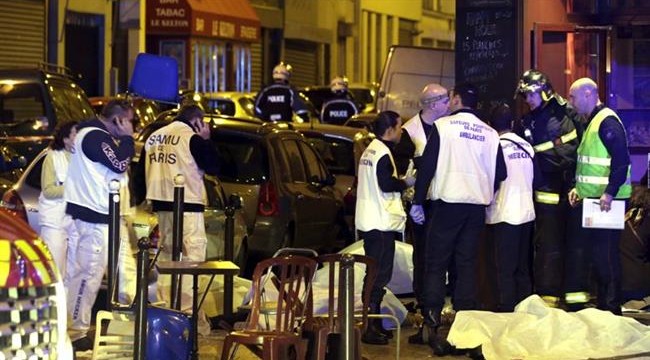 About 160 killed in Paris gunfire, explosions

About 160 people have been killed and over 200 others injured in the French capital Paris in the deadliest attacks to hit the country since the Second World War.

According to French media on Friday night, nearly 120 people, who had been held hostage by gunmen at the Bataclan concert hall in central Paris, were killed. Witnesses say the terrorists were shooting for 10 to 15 minutes. Officials said eights of the attackers were killed, including three of them who blew themselves up. About 40 other people were reportedly killed in other attacks across Paris.

In another Friday attack, at least 11 people were killed by gunmen outside a bar called Le Carillon in Paris.

According to the French Liberation daily, at least 100 rounds were also fired atLa Belle Equipe cafe in the 11th district.

At the time of the explosions, French President Francois Hollande was present at the stadium, where France were hosting Germany, but he was evacuated to safety before holding crisis talks with Prime Minister Manuel Valls and Interior Minister Bernard Cazeneuve at the Interior Ministry building.

The explosions near the stadium could be heard inside during the match as they happened in the first half, but the match was not stopped. France beat Germany 2-0 in a game overshadowed by the terrifying violence.

French police said at least four attackers — three of whom wearing explosive belts — were killed, warning that some other assailants “may still be on the loose.”

In a brief televised statement, Hollande said two major decisions had been made and a cabinet meeting had been called.

Pointing to the first decision, he said, “A state of emergency will be declared,” adding, “The second measure will be the closure of national borders.”

“We must ensure that no one comes in to commit any act whatsoever, and at the same time make sure that those who have committed these crimes should be arrested if they try to leave the country,” the French president noted.

Hollande has also cancelled his planned visit to the G20 summit in Turkey, due on November 15 and 16, following the Paris attacks.

Large numbers of Parisians held candlelight vigils across the city in the early hours of Saturday morning in memory of the victims of the deadly Friday attacks.

A large number of political figures and international bodies across the globe denounced the fatal Paris attacks.

Russian President Vladimir Putin offered condolences and support to his counterpart Francois Hollande and the people of France.

At a press conference at the White House, US President Barack Obama said his administration is ready to “provide whatever assistance that the government and the people of France need,” and pledged to “bring these terrorists to justice and go after any terrorist networks” involved. He also described the series of deadly incidents across Paris as an “attack on all of humanity”.

German Chancellor Angela Merkel said she is “deeply shaken by the news and pictures that are reaching us from Paris.”

British Prime Minister David Cameron said he was “shocked” by the attacks in Paris, vowing to assist the neighboring country.

European Commission President Jean-Claude Juncker wrote on his Twitter page that he was “deeply shocked by the events in Paris,” expressing “full solidarity with the people of France.”