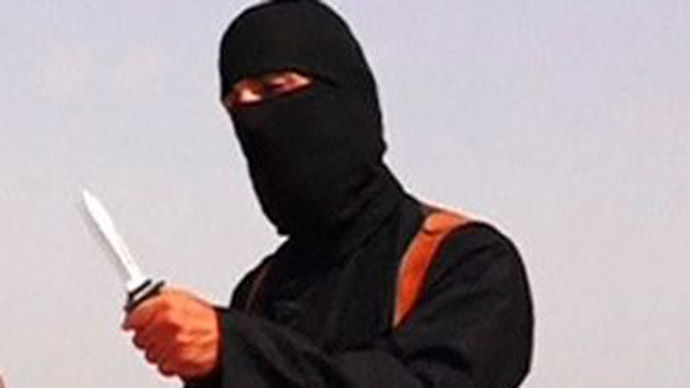 (CNN)”Jihadi John,” the jeering, sadistic masked mouthpiece of ISIS, may have been killed in a coalition airstrike in the northern Syrian city of Raqqa.

His real name is Mohammed Emwazi, and he took part in the killings of American journalists Steven Sotloff and James Foley, U.S. aid worker Abdul-Rahman Kassig, British aid workers David Haines and Alan Henning, Japanese journalist Kenji Goto and other hostages, according to the Pentagon.

British Prime Minister David Cameron described the airstrike that may have killed Emwazi as an act of self-defense as he awaited confirmation of the death.

“It will be a strike at the heart” of ISIS, Cameron said, if Emwazi has been killed.

“We always said we will do whatever is necessary to track down Emwazi and stop him taking the lives of others,” he said.

But there was no sense of victory from Louise Woodward-Styles, who was a friend of Henning’s.

“There’s just sadness,” she said. “It reminds you of the loss of Alan and just hoping it’s closure for the family. But also I hope it reminds people that the issue of Syria is still ongoing, and not to forget the reasons why Alan was there. I’d like to encourage people to carry on his work and legacy.”

While the Pentagon, in announcing the strike Thursday night, would not say definitively that Emwazi was killed, officials said authorities are confident he was.

This was a mission of “persistent surveillance,” a senior U.S. official said, adding that authorities knew it was him when they took the shot.

Who is ‘Jihadi John’?: What we know about the face of ISIS

Emwazi was in a vehicle at the time of the strike, which was launched from a drone, another U.S. official said.

Cameron said the airstrike was the result of the UK working with the United States.

Justice for ‘victims of this evil man’

Emwazi, a British citizen, has been a most wanted man.

As the masked face of ISIS, he appeared in a series of brutal videos, dressed in black and holding a knife.

The Ramadhan Foundation, a Muslim organization in the UK, called Emwazi the manifestation of evil.

“The killing of Mohammed Emwazi in Syria is a significant moment in the fight to get justice for David Haines, Alan Henning and all the victims of this evil man,” said Mohammed Shafiq, the group’s executive director.

The strike appeared to have taken place Friday in Syria — Thursday night in the United States.

Syrian activists in Raqqa reported that four ISIS foreign fighters, including a leader with British nationality, were killed by the coalition airstrike, the Syrian Observatory for Human Rights said.

Cameron was aware of the strike and notified families whose relatives had been murdered by Emwazi.

“Britain has been working hand in glove with America over the ‘Jihadi John’ drone strike, to defeat (ISIS), and to hunt down those murdering hostages,” Cameron’s office said. “The Prime Minister has said before that tracking down these brutal murderers was a top priority.”

Emwazi, who speaks English and is believed to have been born in Kuwait, was seen frequently in hostage videos, participating in beheadings.

For some periods of time this year, Emwazi was not seen in the videos, though U.S. officials told CNN in July they had learned that he was alive and hiding near Raqqa.

Analysts describe him as grotesque and fond of sadistic torture techniques, with one former hostage recounting last month how his captor made him dance the tango with him.

Friends of Emwazi said they believed he started down the road to radicalization when he traveled to the East African nation of Tanzania in 2009, The Washington Post reported this year.

He was supposed to be going on safari, but he was reportedly detained on arrival, held overnight and then deported. He was also detained by counterterrorism officials in Britain in 2010, The Post said.

Authorities have not disclosed the reasons for those reported detentions.

The Post’s report includes emails Emwazi purportedly wrote after British counterterrorism officials detained him and stopped him from flying to Kuwait.

“I had a job waiting for me and marriage to get started,” he wrote in a June 2010 email to Asim Qureshi, a member of the CAGE civil rights group, The Post reported.

But now “I feel like a prisoner, only not in a cage, in London. A person imprisoned & controlled by security service men, stopping me from living my new life in my birthplace & country, Kuwait,” the email said.

Some terrorism experts said he was on a path toward extremism years before that incident.