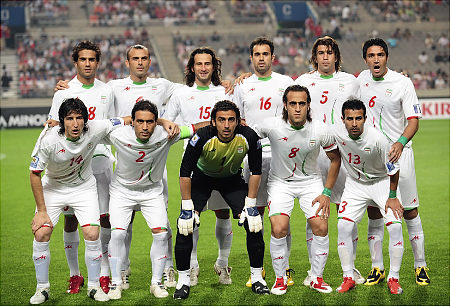 Staged at Azadi Stadium in Tehran on Thursday November 12, Iranian soccer players pulled off a victory against Turkmenistan following their previous draw against Oman in a match held in Muscat October 8 as part of Group D qualifying matches for the 2018 FIFA World Cup.

Morteza Pouraliganji, Saeed Ezzatollahi and Ashkan Dejagah found the net for Iran while Mekan Saparov could nail it for the Turkmenistan.

Attended by 40 thousand spectators, the match was officiated with a Korean referee.

Since the beginning moments of the match, Iran sat off a strong start applying great pressure on Turkmenistan’s goal.

In the 7th minute, Iran’s 29-year-old Ashkan Dejagah sent a ball on Turkmenistan’s goal from the left side, and Morteza Pouraliganji, put the ball at the back of Turkmenistan’s net to score the first goal for the hosts.

Dejagah then received a good pass in Turkmenistan’s penalty area in the 10th minute, and directed the ball at Turkmenistan keeper Mammet Orazmuhammedow, who stopped Iranians from scoring the second goal.

Iranian footballers had several other opportunities to place the ball into Turkmenistan’s net in the remaining minutes, though they missed all chances.

Turkmenistan’s Mekan Saparov could successfully nail it to level the score at 1-1 following a corner in the 61st minute.

In the 80th minute, Reza Ghoochannejhad Nournia was brought down by a Turkmen footballer in the box, and the Persians were awarded a penalty where Dejagah struck the penalty sealing the 3-1 victory for the Islamic Republic of Iran.

In its next 2018 FIFA World Cup qualifying match, Iran will take on Guam at the Guam Football Association Field in Dededo on November 17.