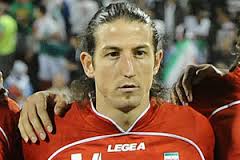 Group D second-running team Iran is scheduled to face third-running Turkmenistan in a crucial match at the Azadi Stadium in Tehran on Thursday.

Iran has also been scheduled to face the national football team for the US territory of Guam on November 17 in a Group D World Cup qualifying match, but some Team Melli players have struggled to get the necessary visas.

Teymourian, who is not allowed to travel to Guam, will travel to Qatar Wednesday night to begin the process of obtaining his visa in Doha.

Ashkan Dejagah will likely wear armband for the first time in the match against Turkmenistan.