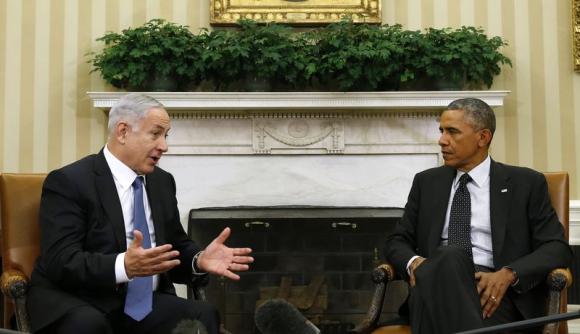 Prime Minister Benjamin Netanyahu allegedly discussed the issue with President Barack Obama during their meeting at the White House on Monday.

According to media reports, the Israeli PM said Washington should adopt a “different thinking” with regards to the issue in the face of the Syrian conflict.

An unnamed official told the Israeli media that Netanyahu believes that the conflict in Syria allows for a different view on the future status of the strategically important area, which the Tel Aviv regime occupied in 1981.

Sources close to the discussions say that Obama left the plea unanswered, and both leaders failed to elaborate on the matter with reporters.

Netanyahu also reportedly expressed doubt about the outcome of the Syrian peace talks between the world powers and different fractions involved in the long-standing conflict.

“We won’t tolerate attacks from Syrian territory, we won’t allow Iran to open a front [against us] on the Golan Heights, and we will disrupt the transfer of deadly weaponry from Syria to Lebanon,” Netanyahu told Obama.

Earlier this week, Michael Oren, Israel’s former ambassador to Washington, also urged Netanyahu “to ask for American recognition of full Israeli sovereignty on the Golan Heights through a presidential declaration and accompanying letter.”

Israel seized the Golan Heights from Syria after the 1967 six-day war, which created an armistice line under Israeli military control. The regime then proceeded to unilaterally annex the lands, a move that has yet to be recognized internationally.

Israel has built more than 30 Jewish settlements in the area ever since. It has also used the region to carry out a number of military operations against the Syrian Army.