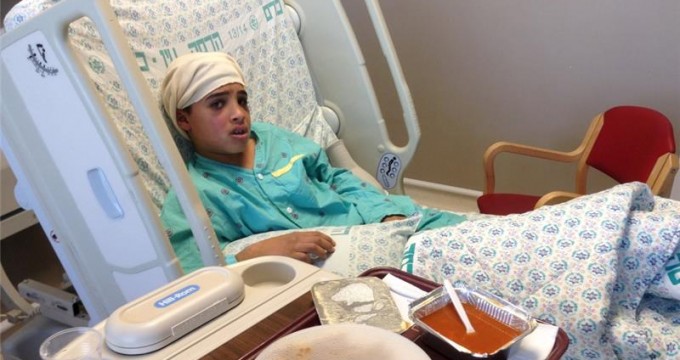 Tehran, November 11, The Iran Project– The released footage of a 13-year-old Palestinian boy who was interrogated and verbally abused by Israeli forces has aroused many angers in social media.

The video shows Israeli police officers yelling and verbally abusing the boy while he is heard saying he can’t remember anything. Israeli police alleged that the Palestinian boy, Ahmed Mansara, together with his 15-year-old cousin is accused of stabbing two Israelis earlier in October.

Earlier, a video showing Mansara lying on the ground and bleeding to death while humiliated by Israeli passerby has been extensively released in the social media. That footage also aroused many feelings against Israeli crime all over the Palestinian occupied territory.

Tariq Bargouthi, Mansara’s lawyer, said using intimidation tactics are even barred by Israeli law. A member of the Public Committee against Torture in Israeli also called the boy’s interrogation by Israeli detectives “brutal”.

A senior Palestinian official on Tuesday also demanded action against such inhuman measures by Israeli government. The Palestinian resources said that the Authority Ministry of Foreign Affairs urged the embassies to distribute and share “the painful and barbaric” scenes.

The Qalandiya refugee camp near Ramallah, the West Bank has been the bloodiest scene of clashes in Palestine on Wednesday.

The locals and medical staffs said the resources that Israeli forces have opened fire to Palestinian protesters, injuring some 13 Palestinians in Qalandiya refugee camp with live fire. The reports also noted the detention of several people including an injured 16-year-old child.

The development came after the Israeli forces raided the Palestinian residents in the camp and in response Palestinians threw stones. An Israeli military spokesperson alleged that the Israeli entrance into the camp is a “routine activity” in order to “arrest suspects involved in illegal activities”.

The clashes in al-Arrub refugee camp near al-Khalil in the West Bank broke out on Wednesday for the second consecutive day. During the tensions in the camp, Israeli used tear gas to disperse the Palestinian protesters who marched to commemorate the 11th anniversary of Palestinian leader Yasser Arafat death.

A witness has told al-Maan news agency that during the camp raid on Tuesday, Israeli forces “tortured” the owners of the homes.

As Israeli government broaden the measure to surpass Palestinians, Israeli forces have destroyed three water well which they alleged has built without permission. According to a Palestinian security sources, Tel-Aviv forces used bulldozers to demolish the wells in the West Bank. This is not the first time that Israel destroyed the Palestinians’ homes and facilities under the pretext of no building permit.

Israeli forces also detained eight Palestinians in al-Khalil on early Wednesday. The local resources said the detention made after the forces’ raid to Palestinian homes in the city.

During the clashes in the same city on Tuesday also another Palestinian teenager was shot in face and critically injured. The incident came after the Israeli raid into Aida refugee camp in north of Bethlehem.