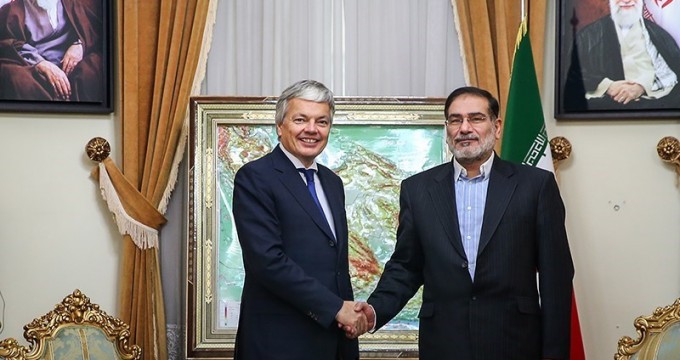 Tehran, Nov 9, IRNA — Secretary of the Supreme National Security Council Ali Shamkhani said on Monday that sound and timely implementation of commitments such as lifting sanctions will be the criteria to check determination of Iran and G5+1 to broaden cooperation.

Shamkhani made the remarks in a meeting with visiting Belgium Foreign Minister Didier Reynders.
Possible unconstructive practice or continuation of threats or hostility prevent cooperation to implement JCPOA, he said.
It is necessary for both sides to broaden cooperation in commerce, politics, economy, science and technology benefiting from joint economic potentials, Shamkhani said.
Nuclear deal between Iran and G5+1 has created new avenues for expansion of economic cooperation between Iran and Europe and those refused to go along with the US on tough sanctions will be given priorities, Shamkhani said.
Shamkhani expressed deep concern about deterioration of humanitarian situation in the Middle East and the subsequent influx of refugees to the European states, saying that the humanitarian responsibility of European governments is very grave.
All should cooperate to remove insecurity and cooperate in international campaign against terrorism and help restore security, stability and welfare in the troubled countries, Shamkhani said.
Extremism, violence and terrorism is a global issue and all governments should help halt their activities, he said.
The Islamic Republic of Iran plays leading role in campaign against drug-trafficking to Europe and is critical of the double-standard policies of the European governments, he said.
Belgium foreign minister, for his part underlined that his country calls for expansion and bolstering relations and cooperation with Iran and expressed the hope that lifting sanctions on Iran will lead to expansion of cooperation between the two countries.
Belgium is aware on importance of fight with terrorism as it has really felt its danger and believes that a collective and serious campaign required to this end, said Belgium foreign minister.