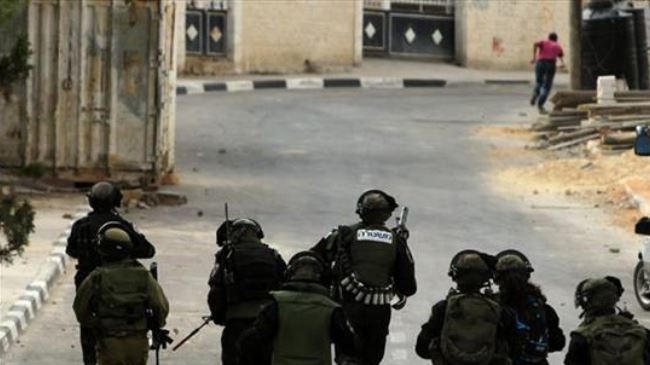 The witnesses also said the Israeli soldiers threatened to investigate against the staffs who don’t mention the name of patients. Dr. Rafiq al-Husseini denounced the Israeli move, calling it the violation of patients’ privacy which also is a breach of international humanitarian law.

This is not the first time Israel stormed the Palestinian hospitals. Earlier, Israeli undercover unites dressed as Palestinians raided this hospital, detained a Palestinian and urging the staff to provide the patients’ medical records.

In series of Israeli massive arrests in the West Bank, some 36 other Palestinians were detained by Israeli security forces overnight Monday. In a statement by Israeli army it confirmed the news, alleging that it arrested some “Hamas operatives”.

Elsewhere in Tulkarerm, the West Bank Israeli soldiers opened fire to the Palestine Technical University students, injuring five with live fire 13 other with rubber bullets and some 50 more with gas inhalation on Monday. The incident came after the Israeli forces raided the university campus which according to Red Crescent has left totally 70 injuries to students.

Israeli forces also killed a Palestinian 24-year-old woman in Bethlehem for the alleged attempt to stab Israeli forces on Monday.

Gaza strip also has been the scene of Israeli airstrike overnight Sunday. The locals said that Tel-Aviv warplanes have raided the area on Sunday evening while no report of injuries is available yet. Tel-Aviv alleged that it is in response to the rockets fired from Gaza earlier in the day.