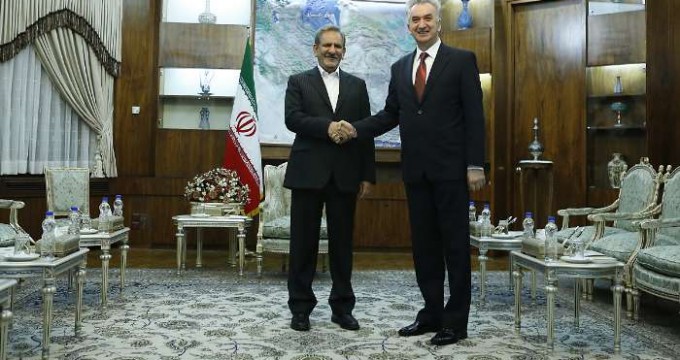 Veep: No obstacle on way of Tehran-Sarajevo cooperation

Tehran, Nov 9, IRNA – First Vice-President Eshaq Jahangiri said Monday that there is no hindrance to enhance bilateral relations between Iran and Bosnia and Herzegovina.

In a meeting with visiting Minister of Foreign Trade and Economic Relations of Bosnia and Herzegovina Mirko Sarovic, Jahangiri said other states are contesting with each other to enter Iran’s economic markets.

From the beginning of independence in Bosnia and Herzegovina, Iran has extended due support to that country, noted Jahangiri.

Now, Tehran is ready to promote ties with Sarajevo, he added.

Jahangiri further described the second meeting of the two countries’ economic commission as an effective step towards further economic relations.

After the July 14 nuclear agreement between Iran and the six world powers, the travel of the foreign trade delegations to Iran has been raised, said he.

For his part, Sarovic described Iran as an economic incentive for the region.

About the July 14 landmark nuclear agreement, he said it will be constructive for all sides.

Sarajevo is interested in having constant economic relations with Tehran, he added.

Also, a trade delegation from Bosnia and Herzegovina arrived in the northern Iranian province of Alborz this morning to review ways of expansion of industrial cooperation with that province.