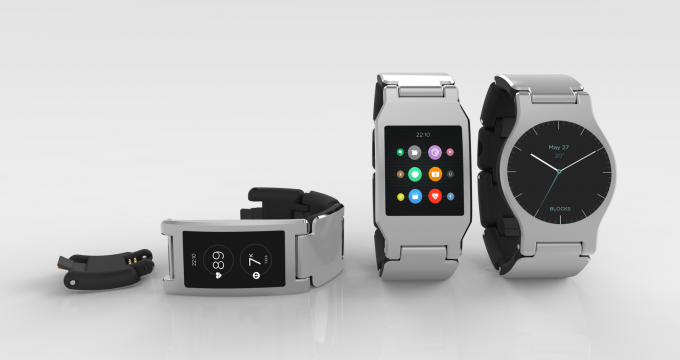 As the world becomes obsessed with wearable technology, an Iranian engineer has wowed the world’s startup community with his new modular watch design.
The inventor of the BLOCKS smartwatch has so far raised $1.3 million in Kickstarter funding with still 10 days to go.
In a Financial Tribune exclusive we spoke with Alireza Tahmaseb-Zadeh, the brain behind the BLOCKS project, to see how he came up with the invention.
1. Where did your modular timepiece idea come from?
I was working on a gesture-control wristband idea three years ago as part of research I was doing on my own time while studying. This wristband could be useful to control the music on your phone.
For example, you could pause the music with a tap of your finger or you could turn the music louder by rotating your wrist. Asking a lot of people, I realized people need much more features in a smart device they want to wear, in addition to gesture control.

The possibilities of different sensors and functionalities, which can be put on a smartwatch, are endless. However, each of these sensors is an actual hardware piece and it’s not possible to fit them all in a single device.
Other smartwatch manufacturers select a few of these functionalities and embed them into a single device, which makes the end user to compromise on the functionalities they want. I wanted to give the power back to the end users.
Putting each sensor/function in a link in the band of the watch, the users can choose the links they want, connect them and make their ideal smartwatch. This was the idea behind BLOCKS and I came up with this idea when I was 19.
2. How do you think BLOCKS will transform the market?

BLOCKS has three main benefits: It is a personalized and bespoke watch rather than being a generic device. Moreover, BLOCKS is future-proof and the last smartwatch you will ever need. Instead of buying a new smartwatch every year or every other year, as we do with our smartphones these days, you can buy BLOCKS once, and keep on replacing the modules when the new technology becomes available.
Finally, BLOCKS is an open platform. It is not only made by one company, but rather each module comes from a different company and anyone can develop these modules for BLOCKS. All this means even more choice for our users.
3. Do you believe you can take on Apple with your new product?
The wearable technology sector is vast and there are different markets and applications for smartwatches. This modular device is not only beneficial for our users, but also for our business model.
With this modular approach, we can shift toward various markets very easily. We are not necessarily competing with Apple.
BLOCKS is a smartwatch for more professional users and can fill the various gaps that currently exist in the market.
4. Have you had any companies interested in partnering up with your company, like say GPS companies, or are you going to make all the modules yourselves?
Of course, we are working with very large companies from around the world. Some of them, we cannot announce their names yet. However, I can say we are working with Qualcomm, ARM, Compal, PixArt, a number of telecom companies in the US, EU and Japan, as well as some financial institutes for payment gateways.
5. What do you think could be one of your company’s weaknesses in bringing this item to market?
Probably the biggest bottleneck for us is the apps ecosystem. We are innovating on the hardware side and the user experience by making this smartwatch modular. We are also using a modified version of Android to make this easy for developers to make apps. However, we will have restrictions from giants like Apple for iOS integration and Google for Google Mobile Services, and access to the apps ecosystem.
6. What has been the reaction of the tech community and venture capital groups?
It has been very good so far. We raised investment from notable Silicon Valley investors before the Kickstarter campaign.
7. Did studying in Tehran help in your journey in creating human-computer technology?
Studying in Iran for my high school definitely was very helpful in shaping my skills and knowledge. Attending the Olympiads and Khwarizmi competition in the country helped me to develop my intellectual skills. I had a very short time at the University of Tehran, but even that short time was useful toward improving my skills.
8. A more difficult question now: Do you think ideas like yours could be created in the Iranian startup ecosystem?
It’s very hard to say. Not only Iran, it may not have been possible to work on a project of such a scale and complexities with high capital requirement anywhere other than Silicon Valley or in the UK.
Iran is starting to see a very vibrant startup scene with talented people leading it. There are a lot of other types of startups that can