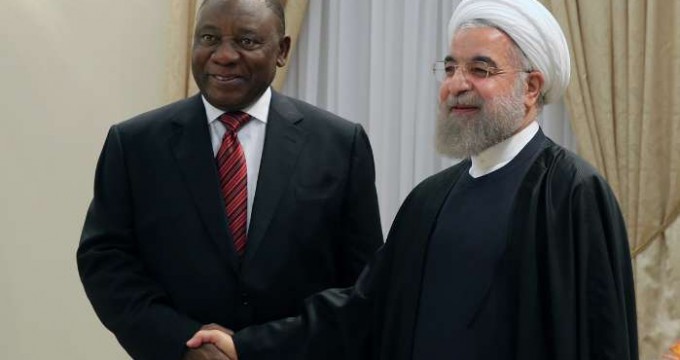 Speaking in a meeting with South African Deputy President Cyril Ramaphosa in Tehran on Monday, President Rouhani pointed to the two countries’ capacities and stressed the need to utilize the potentials to deepen the bilateral relations in all spheres.

“The Islamic Republic of Iran has always considered South Africa as a friendly country and supported its people’s revolutionary and independence-seeking stances,” he noted.

The Iranian president emphasized that Tehran always welcomes development of ties with Pretoria in all areas.

He further pointed to the new atmosphere created after the recent nuclear deal between Tehran and six world powers, saying that Iran and South Africa should seize the opportunity and promote relations more than before.

The South African deputy president, for his part, hailed the friendly and close ties between the two countries, saying that the South African nation will never forget Iran’s stances and supports for their struggle against apartheid.

In a ceremony on Saturday attended by Iranian and South African vice presidents, the two countries signed three Memoranda of Understanding (MoUs) on economic cooperation.

The documents were signed after a meeting between Iran’s First Vice-President Eshaq Jahangiri and Ramaphosa in Tehran.

The MoUs include cooperation in capital market, economic interaction and trade.

The African official arrived in Tehran on Saturday for an official visit at the invitation of Jahangiri.