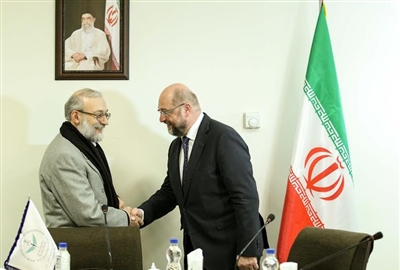 The two called for further bilateral interaction based on mutual respect in various issues, the question of human rights in particular.

This is historical times as with such interactions our nation is opening up to the world, said Larijani in the meeting.

In the fields of science and literature, Iran has had a clear cut global impact. This shows the richness of culture in our country, Larijani noted.

Democratic system in Iran is based on Islamic wisdom, said Larijani. However, he added, some regional countries are suffering from dictatorship for a long time.

Turning to the issue of terrorism, Larijani condemned that phenomenon describing it as human rights’ foe.

He further called on European Parliament to make an all-out humanitarian effort to prevent execution of death verdict issued for Sheikh Namar by a Saudi court.

For his part, Schulz referred to his meetings with the Iranian officials as effective and constructive.

He said he is positive about the future of relations between European Parliament and Iran.

He further said the European Parliament respects democracy in Iran, adding all Islamic states and global cultures have the right to choose their life styles.

Based on mutual respect, the European Parliament and Iran can resume and strengthen interaction, he said.

About Sheikh Namar he said he will do whatever he can to prevent doing such verdict.

Schulz and his delegation arrived in Tehran on Saturday.

Schulz’s visit to Tehran is the first after the July 14 landmark nuclear agreement between Iran and the six world powers.