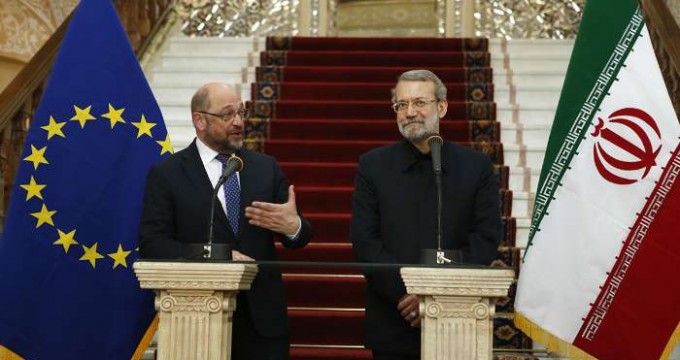 Schultz made the remarks in a joint press conference also attended by Majlis Speaker Ali Larijani.

‘Iran-Europe relations is at a crucial stage,’ he said.

Schultz said Larijani had played a pivotal role in Iran and P5+1 negotiation.

‘The two sides are keen on expanding joint interests,’ he added.

Touching upon Syria issue, he reiterated that Iran plays a key role in settlement of crisis in the Arab country.

Schulz arrived Tehran on Saturday morning to discuss stepping-up dialogue between the EU and Iran.

He will meet with President Hassan Rouhani as well as Foreign Minister Mohammad Javad Zarif.

Schulz was scheduled to visit Tehran earlier, but had to postpone it due to his busy agenda.

Following Iran’s historic nuclear deal with the P5+1 group (the US, the UK, China, Russia, France and Germany), many foreign officials, politicians and business circle representatives started coming to Iran to normalize relations with the Islamic Republic.