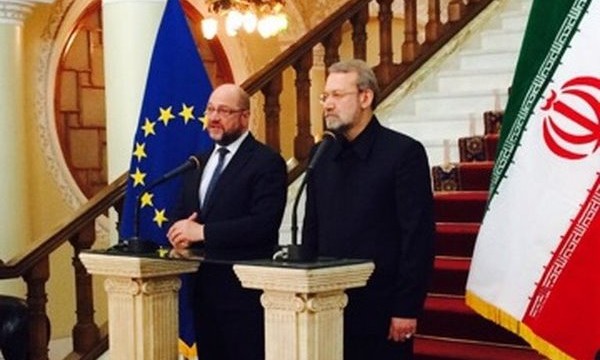 TEHRAN (FNA)- President of the European Parliament Martin Schulz underlined that members of the EU are counting the seconds for the establishment of strong economic relations and cooperation with Iran after the implementation of the country’s nuclear agreement with the world powers.

“We are now moving on the path of the implementation of the Joint Comprehensive Plan of Action (JCPOA) the end of which can open the door to economic cooperation and positive economic developments and we should use this opportunity to the best,” Schulz said in a joint press conference with Iranian Parliament Speaker Ali Larijani in Tehran on Saturday.

Since reaching the nuclear agreement in Vienna on July 14 to end a 13-year-old nuclear standoff, several European delegations, including the French, German and British delegations headed by the three countries’ foreign ministers have visited Tehran to have a share in Iran’s lucrative market in future.

In late July, the UNSC unanimously endorsed a draft resolution turning into international law the JCPOA reached between Iran and the 5+1 (the US, Russia, China, Britain and France plus Germany) group of countries over the Islamic Republic’s nuclear program.

In September, Government Spokesman Mohammad Baqer Nobakht underscored that Iran should develop proper plans to seize the economic opportunities that arise after the removal of sanctions against Iran.

“All the plans should be based on post-sanctions atmosphere and no opportunities should be missed,” Nobakht said in a press conference.

He added that post-sanctions conditions as new atmosphere for investment and the ground should be prepared for domestic and foreign investment.