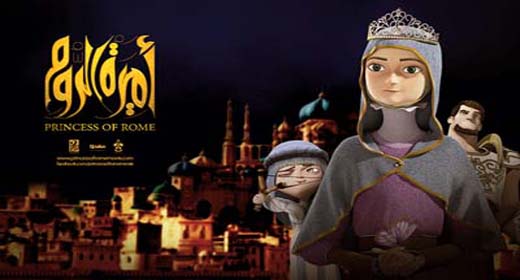 Tehran, Nov 5, IRNA – Iranian 3D animation ‘Princess of Rome’, which chronicles the life of the mother of the 12th Imam of Shias, Imam Mahdi (AS), had its first public screening at Tehran’s Azadi Cinema Complex on Tuesday, on the eve of the National Students Day (Nov. 4).

Minister of Communications and Information Technology Mahmoud Vaezi, who attended the ceremony said, “If our artists can combine art with technology, certainly there is a lot to offer to the world”.

“In today’s world, technology is the fulcrum of global information which can easily be disseminated to the audience,” he added.
Speaking on the animation, producer Hamed Jafari said students are the main target audience of the film.

“Students aged 9 to 15 are the major audiences and that is why we chose school time to screen the animation, and now are holding talks to provide an opportunity to show the film in schools”.

The animation was premiered in Tehran in February 2015 during the 33rd Fajr International Film Festival and received two honorable mentions.

Dubbed in Arabic
A Lebanese company has purchased the rights for its foreign distribution and has so far released it with Arabic dubbing in Lebanon, Iraq, Kuwait and other Middle East countries.

“The quality of ‘Roman Princess’ is far ahead of other animations in Iran and is comparable with foreign works,” Jafari said. “It was made with a budget of $600,000 in 15 months, which is a record in the local animation industry.”

An interfaith story, 40 fictional characters are animated in the work and 100 experts in various fields contributed to the production.
The 75-minute animation, directed by Hadi Mohamadian, tells the story of Malika, the granddaughter of Bardas, the great Caesar of Rome in the 9th century, who was brought to Samarra, a city in Iraq, where she married Imam Hassan Askari (AS), the 11th Shia imam, and was named Narjis Khatoon.

One day, Malika wakes up happily in her palace after dreaming of a promising future. Through the film, the audience follows her as she moves to a slave market in Baghdad, Iraq, and the events that lead to the promised annunciation.

‘Princess of Rome’ is expected to do well at the box office. (FT Daily)