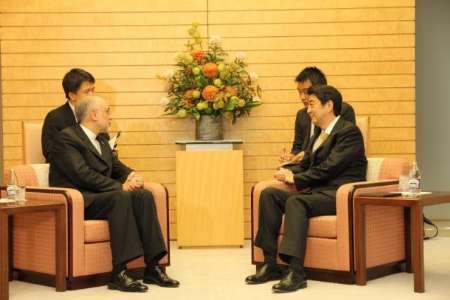 Abe made the remarks in a meeting with Head of Atomic Energy Organization of Iran Ali Akbar Salehi who is now in Japan for bilateral talks.

Referring to the critical security situation in the region due to the presence of the terrorist group of Daesh, Abe called for Tokyo-Tehran cooperation to fight the terrorist threats.

Inviting the Iranian President Hassan Rouhani to visit Japan, Abe called for further Tokyo-Tehran relations after implementation of the JCPOA.

For his part, Salehi appreciated the support extended to Iran during the intensive nuclear talks with the six world powers to reach a landmark nuclear agreement on July 14.

He also invited the Japanese prime minister to visit Tehran.

Salehi arrived in Japan on November 1 to hold talks with top Japanese officials and also to take part in the 61st meeting of the Pugwash Conference on Science and World Affairs in Nagasaki.

On July 14, Iran and the six world powers reached a comprehensive agreement on nuclear issues and put an end to over ten years of negotiations.

According to the agreement, the UN Security Council’s bans on Iran and the unilateral sanctions imposed on Tehran by the US and the European Union will be removed in return for some measures taken by Iran regarding its nuclear program.

The International Atomic Energy Agency (IAEA) is to announce what it has appraised Iran’s peaceful nuclear program till December 15.

It is predicted that implementation of the JCPOA will be at the end of December.