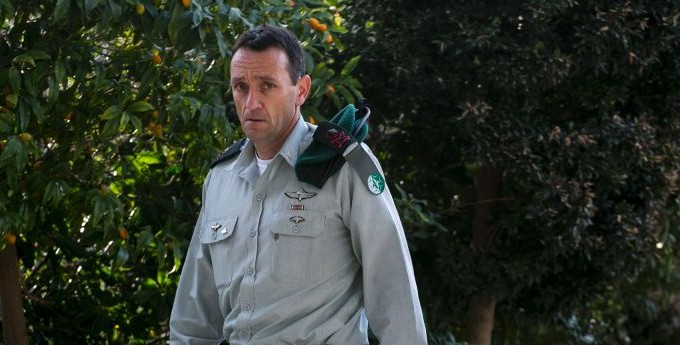 Maj. Gen. Herzl Halevi says in a closed-door lecture that if viral videos existed in 1948, Israel wouldn’t have won the War of Independence.

The Military Intelligence chief said Israel and Iran are engaged in a technology war in which the Islamic Republic is rapidly narrowing the quality gap.
Maj. Gen. Herzl Halevi, speaking at a closed lecture Thursday, added that if the anxiety generated by the videos of Palestinians stabbing Israelis on social media had existed in 1948, Israel would not have won the War of Independence.

He also revealed that recently, MI abandoned an operation at the last minute because of a letter the corps received from a low-ranking officer in its 8200 signals intelligence unit.

Halevi was speaking to a few dozen donors and faculty members of the College of Management at the Rothchild Bank in Tel Aviv. It was an uncharacteristic appearance for Halevi, who in the year since he succeeded Aviv Kochavi has maintained a low profile.

The general did not give a detailed intelligence assessment but delivered remarks that had never been made in public by a top officer in the Israel Defense Forces.

“If you ask me whether we’ll have a war with Iran over the next 10 years, I’ll give you a surprising answer: We are already at war with Iran,” Halevi said. “We’re having a technological war with Iran. Our engineers are fighting Iranian engineers, today, and it’s becoming increasingly significant.”

The war, he said, was over intelligence, weapons and military capabilities, and Halevi was pessimistic. “Today we have the advantage. Iran is closing in on it. Since the 1979 revolution, the number of universities and university students in Iran has increased twentyfold, compared with three and a half times for Israel,” Halevi said, adding that enrollment in science, technology, engineering and math in Iran was skyrocketing.

Halevi touched on the current wave of terror attacks and the difference between the country’s past wars, conducted mainly in border areas, and today’s wars, in which the home front suffers many casualties.
“The next war will be much worse for the home front,” Halevi said. “In the Yom Kippur War there was one home-front casualty; a FROG missile struck the pilots’ quarters of the Ramat David air base. It was the only casualty on the home front. All the rest were military.”

He said a main issue in today’s wars was awareness. “It’s not about how many you killed and how many the other side killed, and it’s not about how far you got and where you planted your flag. It’s about the story that the war tells,” he said.

“All of us, including me and each of you, have for the past month been brainwashing ourselves when we watch those stabbing videos over and over, creating a level of anxiety that, had everyone in the War of Independence been watching the videos of Latrun, San Simon or Nitzanim, it’s not sure we would have been able to keep going.”

Halevi said it was much harder for MI to develop and retain intelligence sources today than a decade or two ago due to rapid technological change. “The same kilogram of intelligence costs much more than it did 10 years ago. Not only does it cost more, its expiration date is significantly sooner,” he said.

“Twenty years ago you had an intelligence accomplishment and you were set for the next five to seven years. Today you might have worked really hard, risking people’s lives, carrying out all sorts of maneuvers. You got something, but with the speed at which our world operates and the speed at which technology changes,” the expiry time declines.

To illustrate this point, the MI chief described efforts to collect intelligence about the Islamic State. He encouraged his audience to not be fooled by the dreadlocks and traditional robes of ISIS operatives. “They use the most cutting-edge technology,” he said. “It’s not carrier pigeons, it’s the most advanced communication systems, with the best encryption on top of that. It changes every couple of days.”

He said MI’s organizational culture was such that even soldiers and junior officers could have great influence. “We faced a dilemma over whether to carry out a particular operation in a particular place. It was about to go up to the chief of staff for a decision, and we needed to decide whether to do it or not,” he said.

“It’s just five minutes before decision time. I might not have read the letter if it arrived one minute later, before the talk with the chief of staff. That’s the ability of people to make an impact at the most critical second of decision-making.”

Halevi defended the standing army against recent criticism about the size of the defense budget. “There’s a bit of an atmosphere in the country today — maybe you don’t think so — but the officers feel that’s it not so positive toward the army,” he said.

“I think this is dangerous. I think it comes a bit from the place of the budget. Officers tell me strangers sometimes stop them on the street saying we’re the problem of the Israeli economy. I’d be cautious. It’s better that the best people are involved — in security in general and intelligence in particular.”

Halevi said he even feared the elimination of mandatory military service in Israel. “The quiet depends on our being strong, and my fear is that we will end the model of a people’s army, and then the IDF won’t accept all of Israeli youth into its ranks and won’t take advantage of the best people,” he said.

“If we change the model of the people’s army, then in the first two or three years inertia will keep us going, but after that the entire defense establishment will be damaged to the point of damage to the state’s security.”