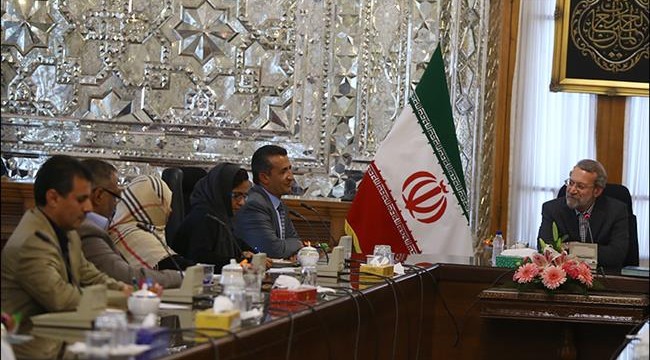 Iran’s Parliament (Majlis) Speaker Ali Larijani says Saudi Arabia has committed “unprecedented” crimes in Yemen during its seven-month war on the country, stressing that Riyadh is a “wicked regime” in the Middle East.

In a meeting with the deputy head of the Yemeni Supreme Revolutionary Council, Naef Ahmad al-Qanis, in Tehran on Saturday, Larijani said the Yemeni people would undoubtedly emerge victorious in the “unequal war” against their country.

“Yemen and the Yemeni people are very important to us and the country’s issues constitute a constant concern for the Islamic Republic of Iran,” the Iranian official said.

He added that the Saudi regime has committed “numerous crimes” in Yemen which have led to the destruction of the impoverished country’s infrastructure and the killing and injuring of thousands of civilians.

Larijani emphasized that the settlement of the Yemeni crisis is a main political priority for Iran, saying resistance of the Yemeni people can teach a lesson to all aggressive countries.

Qanis, for his part, said Iran is a close country to Yemen, urging the Islamic Republic to prepare the ground for transfer of the injured Yemenis to Tehran given the lack of medical facilities in the war-hit state.

He added that Saudi Arabia conducted airstrikes against Yemen due to Riyadh’s aggressive nature, saying Riyadh seeks to dominate its southern neighbor.

The Yemeni people will turn the country into a grave for Saudis through the friend countries’ support, he said.

Yemen has been under Saudi military strikes on a daily basis since March 26. The military campaign is supposedly meant to undermine the Houthi Ansarullah movement and return fugitive former president Abd Rabbuh Mansur Hadi, a staunch ally of Riyadh, to power.