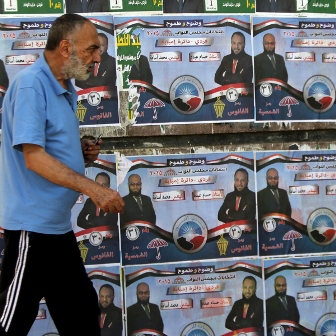 Alwaght- The first phase of Egyptian parliamentary election was held on October 18 and 19 in 14 governorates of the country. The significant point is that some figures from the former regime, Mubarak regime, have won seats in the parliament amid a cold reception of the people and low voter turnout. The winning figures are mostly supporting President Abdel Fatah el-Sisi’s government.

In the first phase, held in 14 Egyptian governorates, only 8 million out of 27 million eligible voters have taken part in the election, which means only nearly %26 of the total numbers of those eligible to vote have cast their votes. With a population of 88 million, Egypt is the largest Arab country, the parliament of which has 596 seats, and 448 candidates are set to be chosen through individual lists, 120 candidates though electoral lists, and 28 others are to be picked by President el-Sisi.

In the first phase of the election other than Muslim Brotherhood, which has naturally condemned all of the post-coup measures and incriminated any participation in the military junta’s road map, other movements including April 6 Youth Movement, Tamarod (Arabic for disobedience) movement, Constitution Party, led by Mohamed ElBaradei, Strong Egypt Party, led by Abdel Moneim Aboul Fotouh, and even the socialist and leftist parties have opposed holding the election for some political reasons, and described it as a nominal election.

However, some electoral lists got into the competition. Four of them have run in north, center and south of Port Said city. They included Neda’a Masr, the Independent National Awakening Fraction, For the love of Egypt, Egypt Front Coalition, and the Independence Movement. Among the present lists, the For the Love of Egypt, a pro-Sisi movement, has managed to win 60 seats. This group has turned out a winner of the electoral lists because it won over %50 percent of the votes. But none of Al-Nour Party candidate, which nominated 200 candidates, has managed to meet the election threshold to enter the parliament, the initial results suggested.

The Egyptian newspapers reported that three out of four winners of the individual electoral lists belonged to the National Democratic Party, a party which ruled the country before the 2011 Egypt’s revolution, and it was led by Hosni Mubarak, the ousted president.

The second phase of the polls will be held on November 22 and 23 in 13 governorates, including Cairo, Sinai and Suez. The low turnout in the parliamentary election’s first stage has sounded alarm bells for the present Egyptian government, though, it was a predictable case. Most of the political experts in Egypt had predicted such a low turnout as a result of el-Sisi’s government failure to solve the people’s problems and improve their living conditions, as well as domestic political stalemate in the country that is result of el-Sisi’s policy of crackdowns against the main opposition force, Muslim Brotherhood, and other independent groups.

Although it can be noted that the Egyptian government has managed to turn the parliament into an instrument in its hands by engineering the election, the analysts and elites of the Egyptian community warn that the continuation of such a tendency could work against the government. The considerable fact is that the regime, with a military and security approach and by imposing a comprehensive crackdown, has managed to put down all of the political opposition voices. And outside Egypt, thanks to el-Sisi’s friends and allies, almost no outcry is heard to protest his measures in the country. However, regarding Egyptian history, specifically the experience of the frustrated youths in their uprising against Mubarak’s regime, the continuation of such a situation could, sooner or later, will spark a furious revolt against el-Sisi.