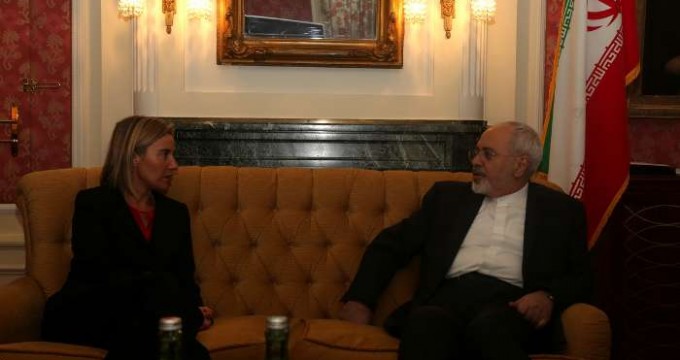 She made the remarks during a meeting on Thursday with Iranian Foreign Minister Mohammad-Javad Zarif who is in Vienna to take part in the Syria peace talks on Friday.

They discussed the crisis in Syria, Iran-EU relations, and implementation of the nuclear Joint Comprehensive Plan of Action (JCPOA) which was reached between Iran and the P5+1 global powers in the Austrian capital last July.

Welcoming Iran’s invitation to the peace talks, Mogherini said the EU supports a negotiated solution to the Syrian crisis, the fight against terrorism, and maintaining Syria’s territorial integrity.

‘All European countries are ready for expansion and strengthening of their ties with Iran,’ she told Zarif.

Earlier in the day, the Iranian foreign minister met with US Secretary of State John Kerry and Russian Foreign Minister Sergei Lavrovm with their talks focusing on Syria.

It is the first time Iran attends the stalled Syria peace negotiations which previously convened in Geneva.

The new round of talks will be held on Friday with US, Russia, Turkey, Iran, Lebanon, Iraq, Egypt, France, Britain, Qatar, Saudi Arabia and Germany will taking part in the negotiations.

Following her meeting with Zarif, the EU foreign policy chief told reporters that major regional and international actors are taking part in the Vienna peace talks to outline a political process and take measures to reach a solution to the crisis in Syria.

To a question, she said the fact that all parties have agreed to sit at the negotiations table is a turning point in order to secure a political solution.

Quoting UN secreary general, Mogherini called for flexibility so that political atmosphere can open up and lead to future meetings to settle the crisis in Syria.