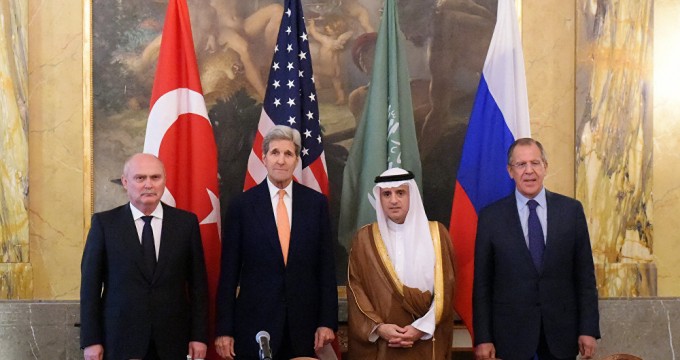 Syria berates Saudi Arabia ahead of talks to end conflict

Syria is not at the Vienna talks, which formally begin Friday. But as U.S. Secretary of State John Kerry and other senior dignitaries arrived in the Austrian capital, Syria’s information minister lashed out at Saudi Arabia, saying it is not qualified to play a “productive” role in resolving the conflict because it is shedding the blood of Muslims and Arabs there, in Yemen and in Iraq.

Backed by the United States, the Saudis want to topple Syrian President Bashar Assad, while Iran and Russia support him. Foreign ministers of all four nations are to meet Friday, in an encounter that will be closely watched to see if Riyadh and Tehran can work together despite deep rivalries over Syria and other issues. The Iranians were not at the first round last week.

Syrian Information Minister Omran al-Zogby called Saudi Foreign Minister Adel Jubeir a “tumor” and a “servant” who had best keep silence. Jubeir said on Wednesday there is no role for Assad in any political transition.

Syria’s exiled opposition also rejected any role for Assad ahead of the talks. In a statement, Syrian National Coalition member Bassam Abdullah dismissed political initiatives like this one in Vienna as attempts to buy time for the military to regain territories from rebels.

Nearly 20 nations have signaled that they will attend, but most attention is focused on the United States, Russia, Iran and Saudi Arabia.

The Iranian delegation is led by Foreign Minister Mohammad Javad Zarif. Zarif and Kerry were the key negotiators in talks that led to the July 14 nuclear deal between Tehran and six world powers after more than a decade of diplomatic efforts.