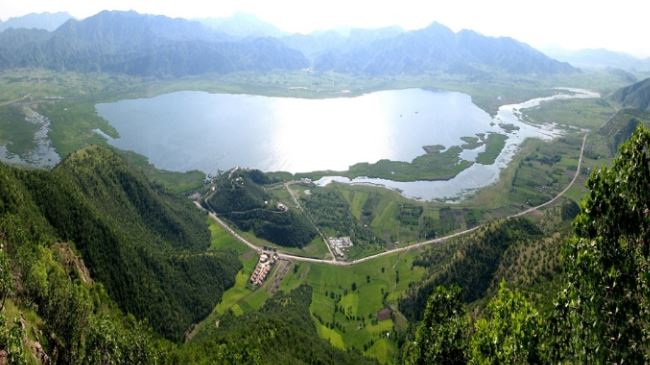 A common misconception among foreigners is that Iran is basically a desert.

You can hardly fault outsiders for that, as a large-scale global campaign to publicize Iran’s myriads of attractions is conspicuous by its absence.

It is not helped by the fact that Iran is located in the planet’s most water-stressed region and is home to Lut Desert, the 25th largest desert in the world.

But the fact is that the country has, for instance, 28 natural and nine artificial lakes, about 15 of which are among Iran’s top natural tourist attractions.
Here we list five must-see lakes located in some of the most scenic surroundings:

Lake Gahar
Located in the heart of Oshtorankouh mountains in Lorestan Province is the mesmerizing Lake Gahar.

Dubbed “the jewel of Oshtorankouh” by the locals, the lake is a reward for those willing to endure a five-hour trek up the mountain as there is no other way to reach the lake. The scenic route and unique vistas, however, make the trek a far more enjoyable experience than it sounds.

Given the lake’s location in the Oshtorankouh Protected Area, there is a strict no-hunting and fishing policy that has helped immensely to preserve the unspoiled landscape.

The lake is formed in a valley called Gaharoud in the southwest of the mountains. One must begin the trek from Aligoudarz County in Lorestan Province.

Most people end up staying the night in the vicinity of Lake Gahar, so travelers are advised to equip themselves with camping essentials.

Although that may be a misnomer—the lake’s popularity contradicts its status as a “lost” paradise—the fact remains that Zarivar is undoubtedly one of Iran’s most beautiful bodies of water in a picturesque region.
The lake has no tributaries and is not fed by springs in the lakebed; melted snow from the surrounding mountains ensures Zarivar is constantly brimming with water.
Lake Zarivar  is located in the western Zagros Mountain Range and within walking distance from dense oak forests.

Riding boats in the summer and ice skating during winter are among the most popular activities the lake has to offer.

Lake Shourmast
Despite its small size, Lake Shourmast is arguably the most notable attraction in Savadkouh, a small village 6 kilometers east of Pol-e Sefid in the lush Mazandaran Province.

Surrounded by towering alder trees, the lake is located close to several historical and religious attractions, including Veresk Bridge, Lajim Tower and Abdolhaq Shrine.
The lake’s proximity to a number of villages and towns makes finding accommodation an easy task. Nonetheless, those with an affinity toward nature can erect tents and spend a night by the lake.

Shourmast is easily accessible, thanks to its convenient location near one of the main routes connecting Tehran to Mazandaran.

This convenience, however, comes at a price: Traveling from the Iranian capital to the verdant northern provinces is a hassle during peak holiday season because of the heavy traffic.

The only tributary that flows into the lake is a stream called Ovan—presumably the lake’s namesake—that originates in the Alborz Mountain Range. Springs in the lakebed also feed Ovan with crystal clear water.

The lake’s location near villages provides travelers with accommodation options, but given the quaint landscape of Ovan, most opt to set up tents and light a campfire around the lake.

Ovan Lake can be reached via a road that connects the provincial capital Qazvin to Alamut.

Perhaps the least-well known of mountain lakes in Iran, Lake Temi in the northernmost part of Khuzestan Province provides travelers reprieve from the region’s sizzling heat.

Situated at the foot of Keyno Mountain, Temi’s water is supplied by the melting snow that blankets the mountains during the chilly winter months. In fact, the rural region becomes so cold in winter that you would be hard-pressed to find any sign of humankind in the area.

Temi is surrounded by a vast, lush plain that abounds with tall oak trees and expansive shrubberies.

To reach the lake, you have to travel north from Dezful, a city 151 kilometers from the provincial capital Ahvaz.