A look at Iranian newspaper front pages on Oct. 29

IFP has taken a look at the front pages of newspapers on Thursday and picked headlines from 22 of them. IFP has simply translated the headlines and does not vouch for their accuracy.

Acceptance by Iran of an invitation to attend a Vienna conference on the Syrian crisis dominated the front pages of Iranian newspapers on Thursday. Reformist-leaning newspapers also gave front-page coverage to the critical comments of Ayatollah Nasser Makarem Shirazi aimed at IRIB.

Ettela’at: Iran is to attend international talks in Vienna over the Syrian crisis.

The announcement came after the UN, the US, Russia and France invited Iran to help work out a solution to the crisis.

Ettela’at: Turkey, Qatar and the United Arab Emirates have reportedly flown 500 IS militants to Aden, Yemen.

In another development, the UN secretary general condemned a Saudi-led coalition’s attack on a medical facility run by Doctors without Borders.

Ettela’at: Verdicts to pull down illegally-constructed buildings are issued but are not implemented, complained the top judge at the Court of Administrative Justice.

Mohammad Jafar Montazeri further said that the number of complaints people lodge against the government has decreased.

Ettela’at: Grand Ayatollah Nasser Makarem Shirazi has criticized the national broadcaster for its one-sided treatment of the nuclear issue.

The source of emulation urged IRIB to walk down the path of moderation.

Ettela’at: A funeral service has been held for two Iranians martyred while defending the holy shrine of Zeynab in Syria. 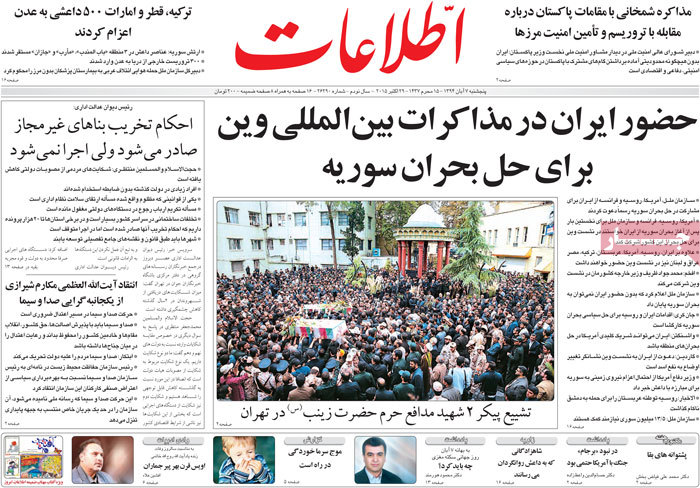 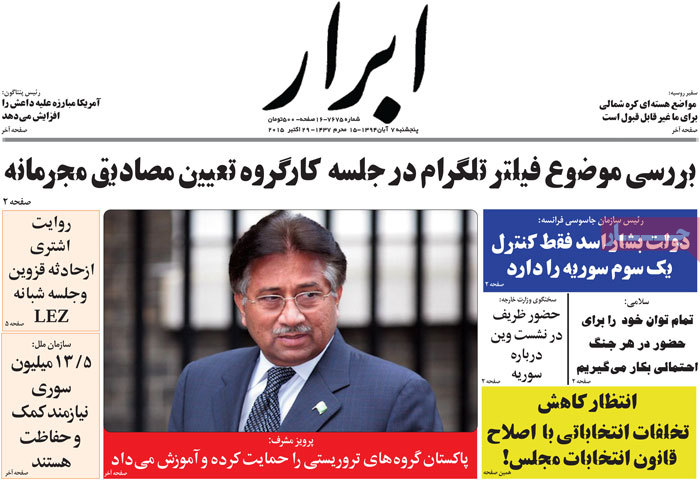 Afarinesh: Imports of gasoline from countries to the north of Iran have been banned.

Afarinesh: On the sidelines of the Vienna meeting on Syria, Iran and the US will get together to coordinate the implementation of the Joint Comprehensive Plan of Action. 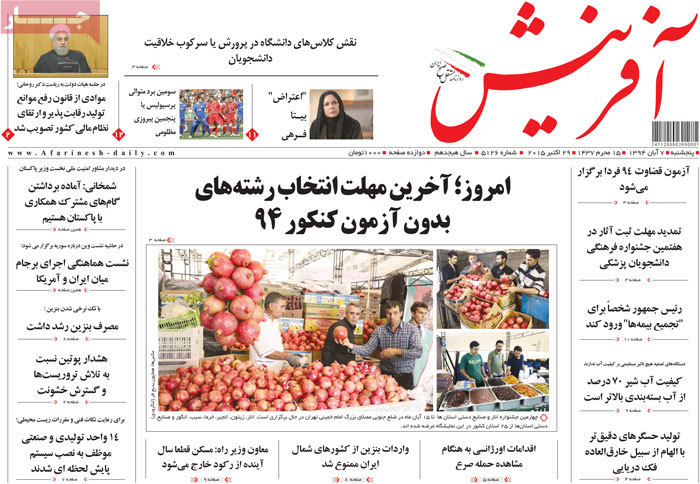 Afkar: Zarif and Mogherini have held talks on the phone over Syria. 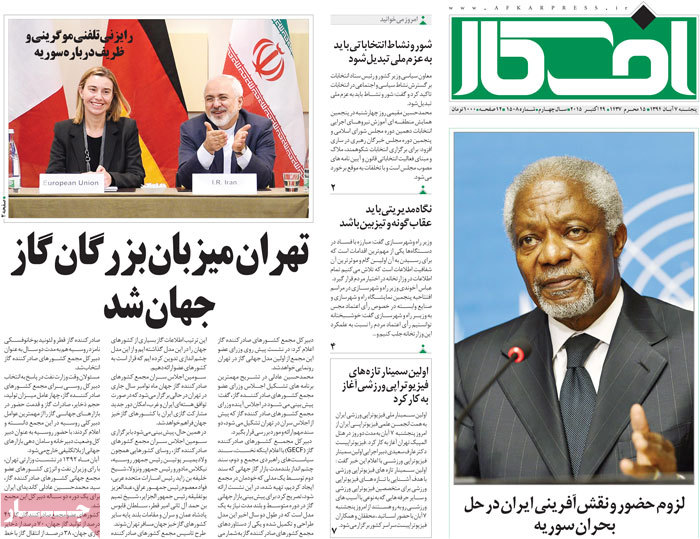 Aftab-e Yazd: Attorneys for the Oil Ministry have said that the preliminary debts of Babak Zanjani [a young billionaire on trial for corruption and embezzlement] stand at €2.066 billion.

Aftab-e Yazd: American lawyers will visit Iran on tourist visas; it is not a business trip, the head of the Bar Association of Iran has said in an interview with the daily. 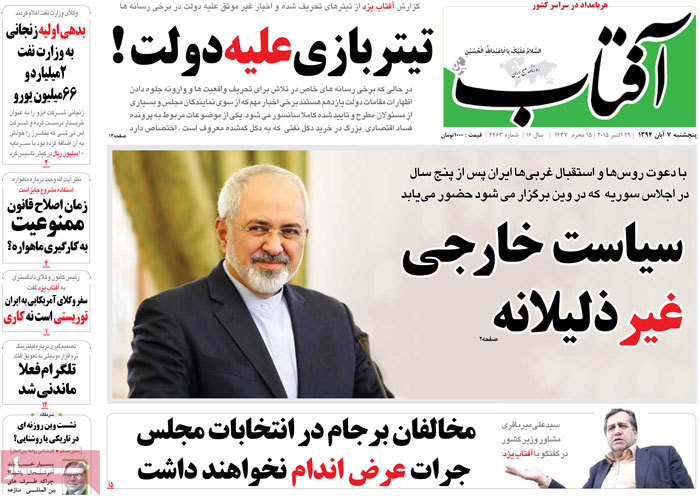 Akhbar Sanat: Iran has been chosen as host of natural gas heavyweights in the world, said the secretary general of the Gas-Exporting Countries Forum. 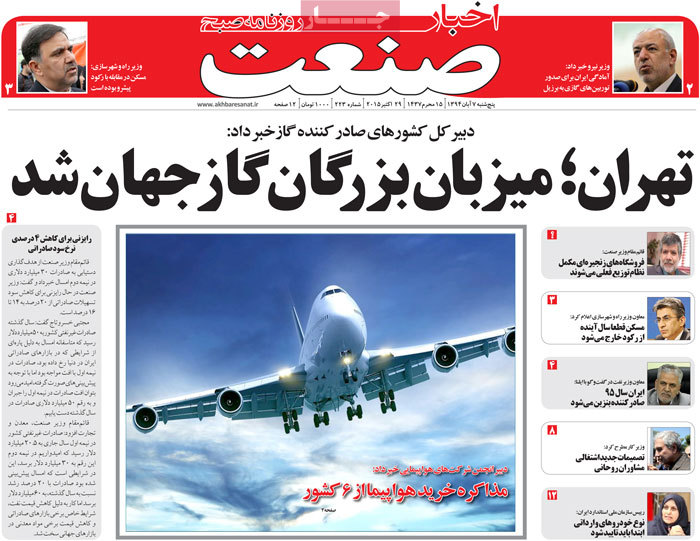 He further said that execution of Ayatollah Nimr al-Nimr will have grave consequences for the Saudis.

Arman-e Emrooz: Zarif and members of his nuclear negotiating team travel to Vienna for a different purpose: To attend a meeting on developments in Syria.

The Iranian and American top diplomats are to get together in Vienna for a non-nuclear meeting. 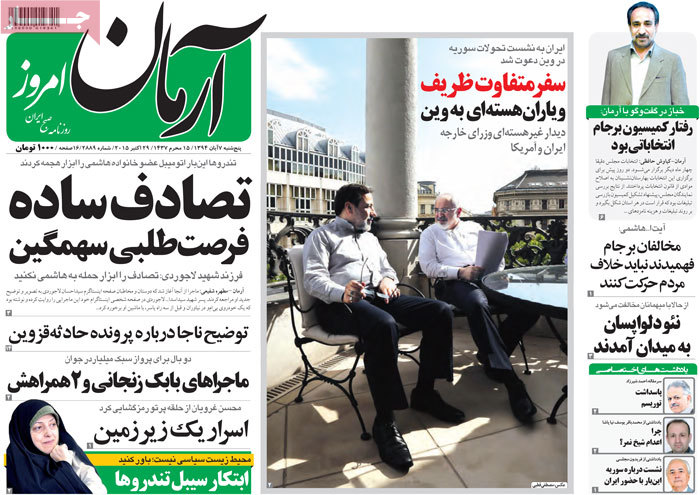 Asr-e Eghtesad: Iran’s business environment has improved by 12 notches, according to a World Bank report. 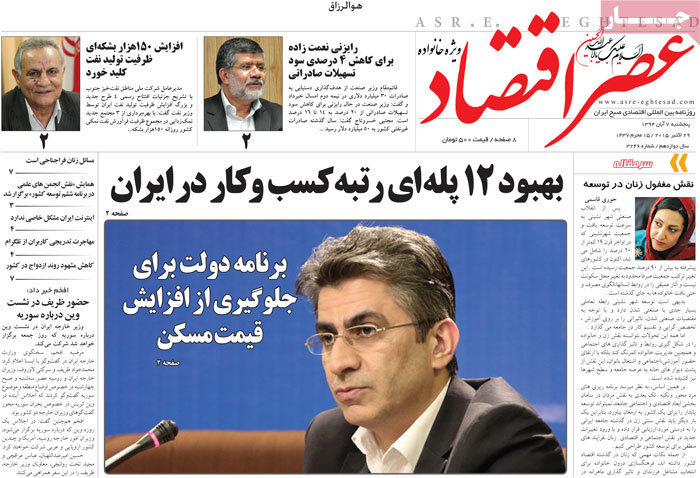 Asrar: Ayatollah Hashemi Rafsanjani has issued a warning to the Wahhabi rulers of Saudi Arabia.

Asrar: “We have been found guilty without ever being tried,” said a number of pop singers in a letter to President Rouhani.

In the letter the singers have complained about bias against pop music in the country.

Asrar: The director of the Environment Protection Organization has said that IRIB is trying to create a media crisis for the administration. 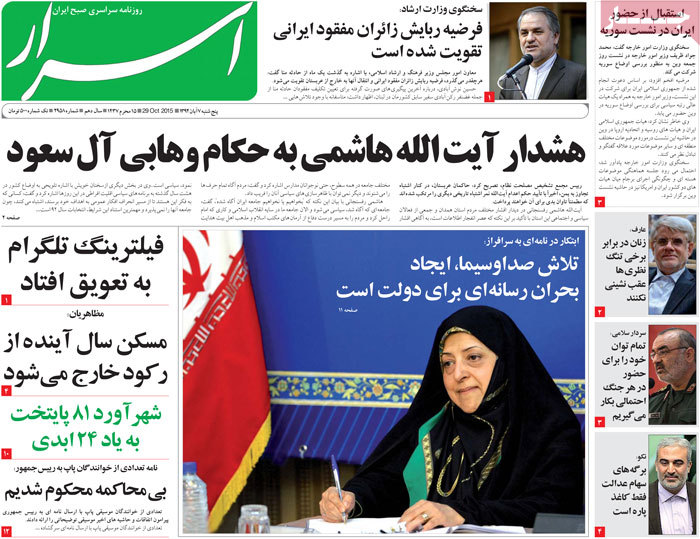 Ebtekar: “The bitter experience of those eight years is enough for Iranian history,” said the chairman of the Expediency Council in reference to the two-term presidency of Ahmadinejad.

Ebtekar: Ayatollah Hossein Vahid Khorasani has said that if religious issues are taken into consideration watching satellite TV would be acceptable. 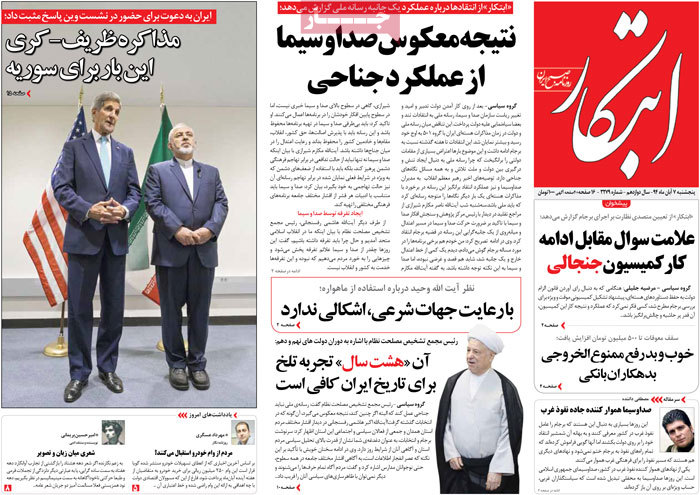 Emtiaz: The air fleet needs $50 billion in investment, said the minister of roads and urban development. 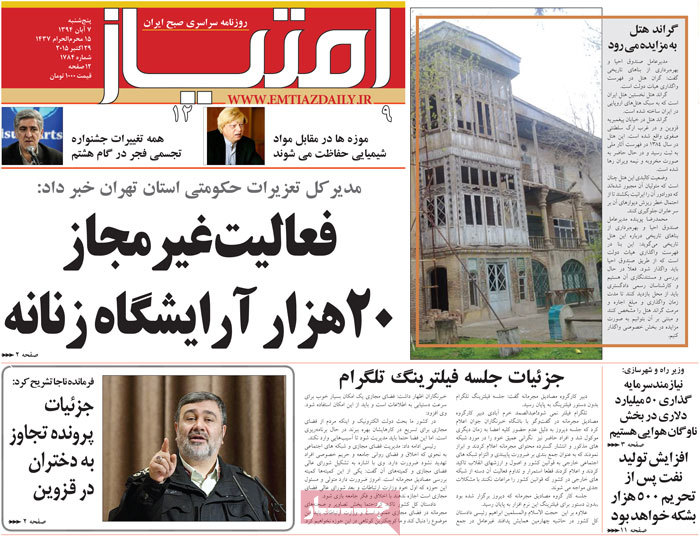 Etemad: A decision on whether to block Telegram [a messaging app very popular in Iran] has been put off.

Etemad: The secretary of the Supreme National Security Council has said that Iran believes in a political solution to the Syrian crisis. 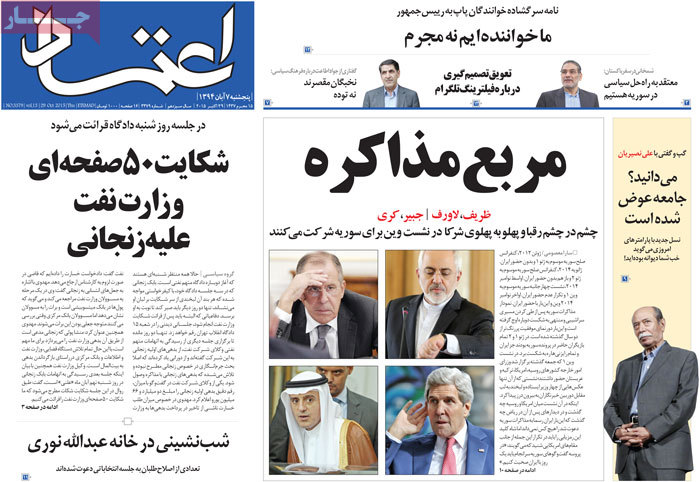 Hemayat: “The reports Ahmed Shaheed issues on Iran are a set of baseless allegations,” said the secretary of the Iranian judiciary’s Human Rights Council. 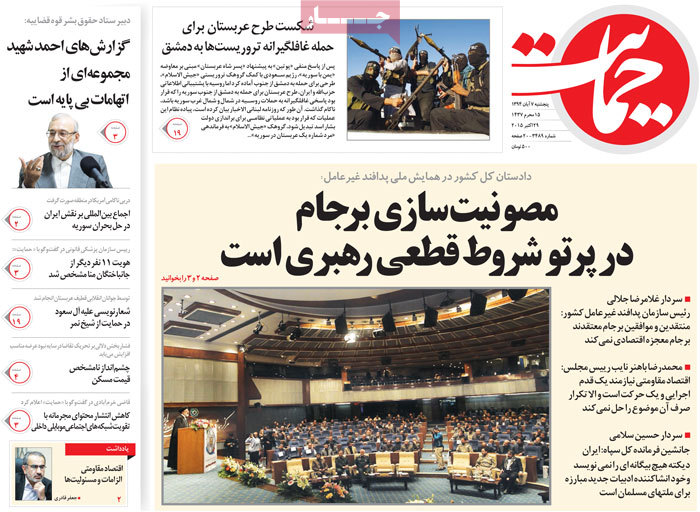 Iran: A change in American attitude; Iran has become a link in the Syrian peace chain.

Foreign Minister Zarif attends the Vienna meeting at the invitation of Secretary Kerry. 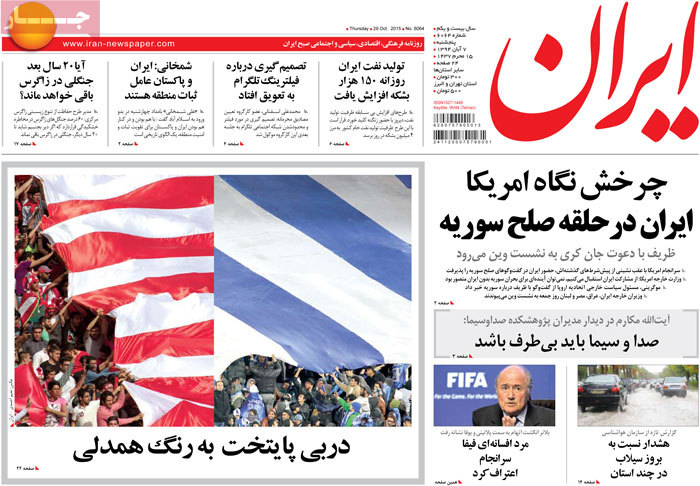 Javan: The military posture of the US in Syria talks

Ahead of the Vienna meeting, US Defense Secretary Ashton Carter has said that ground troops are likely to be sent to Syria. 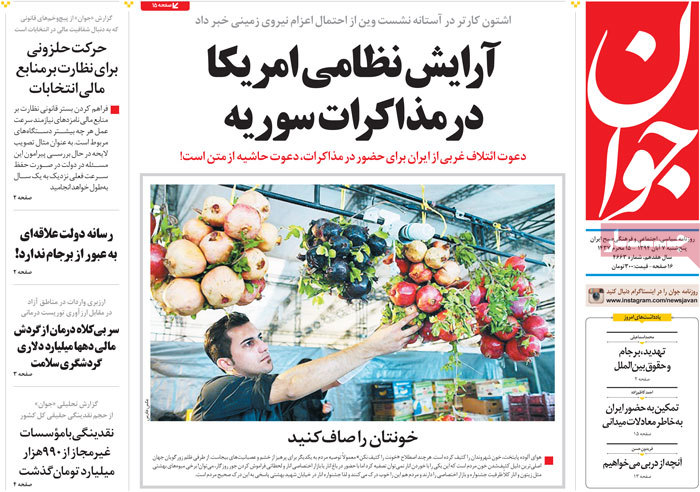 Jomhouri Islami: With the oil minister on hand, three oil projects have been inaugurated in the south.

Jomhouri Islami: Iran’s upcoming presence at the Vienna meeting on Syria has drawn an international welcome. 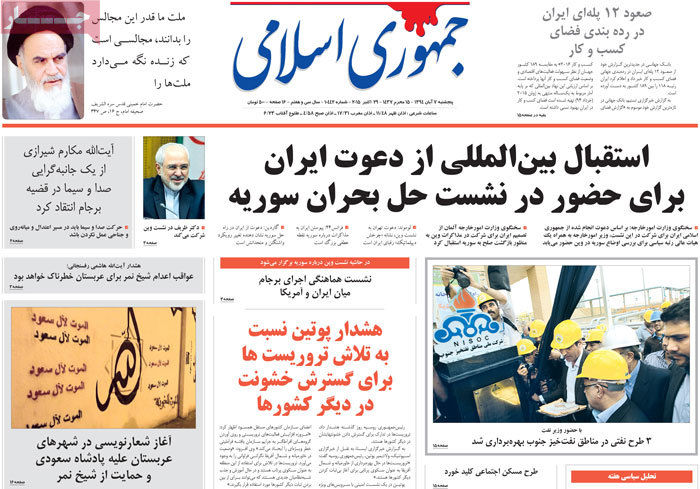 Kaenat: One in every six marriages ends in divorce. 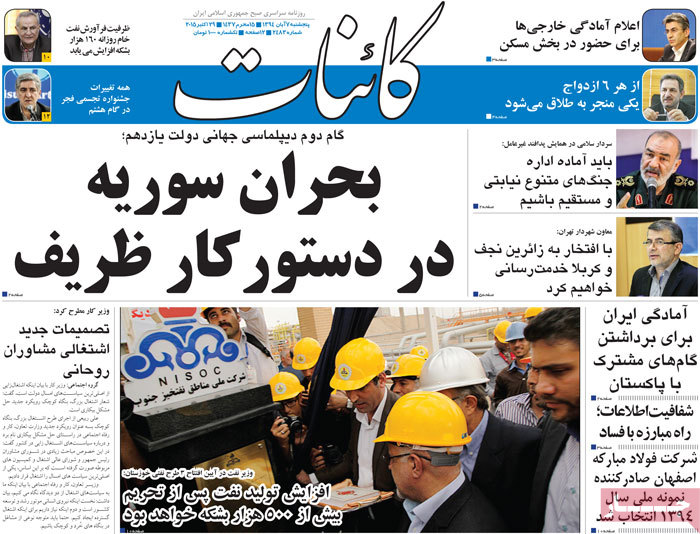 Kayhan: The Atomic Energy Organization has said that nuclear scientists can be interviewed!

Kayhan: The presence of Iran in the Vienna meeting on Syria is what the US needs; it is not a concession. 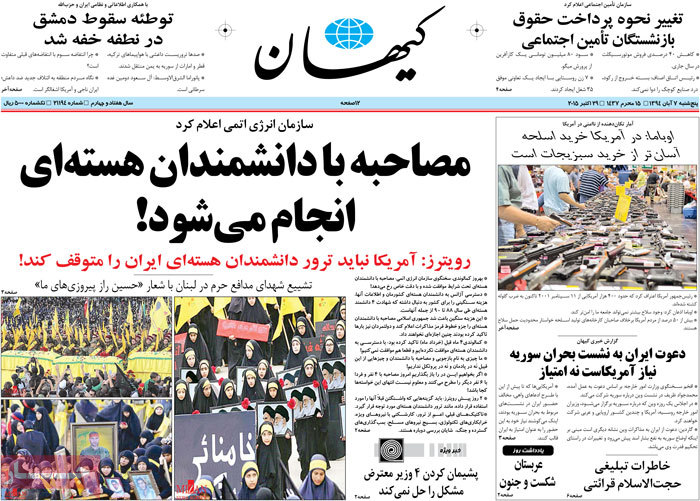 Mardomsalari: IRIB has lowered its position to being the mouthpiece of the Stability Front, said the director of the Environment Protection Organization in a letter to the chairman of the national broadcaster.

Mardomsalari: An 81st encounter between the capital’s soccer heavyweights [Persepolis and Esteghlal] will take place on Friday as the sports community is still mourning the loss of the captain of the red-clads. 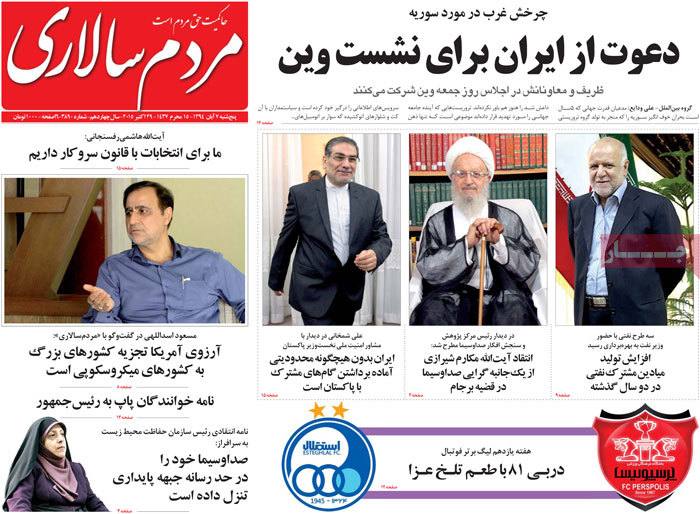 Resalat: The head of the Passive Defense Organization has said that military threats continue to be issued against Iran.

He further said that infiltration and cultural encroachment are among unchanging approaches of the US. 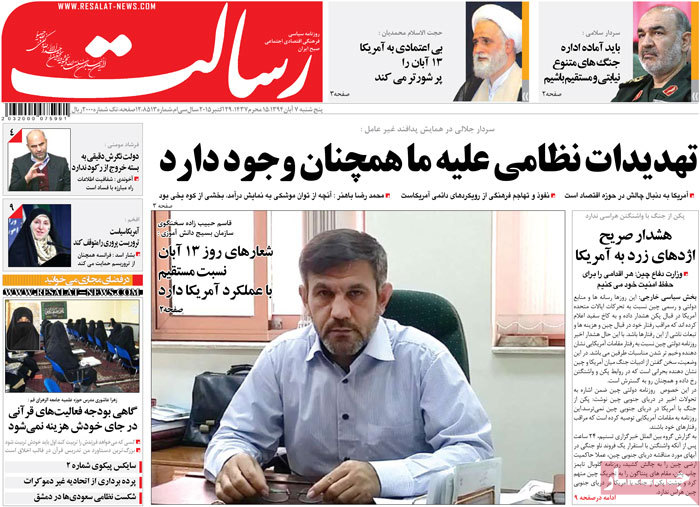 Shahrvand: Arrest warrants have been issued for a number of mayors in the northern province of Mazandaran for dumping the urban waste in areas other than landfills. 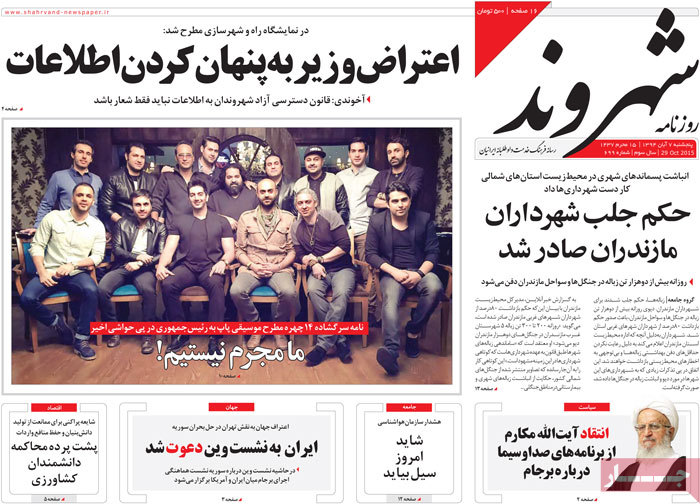