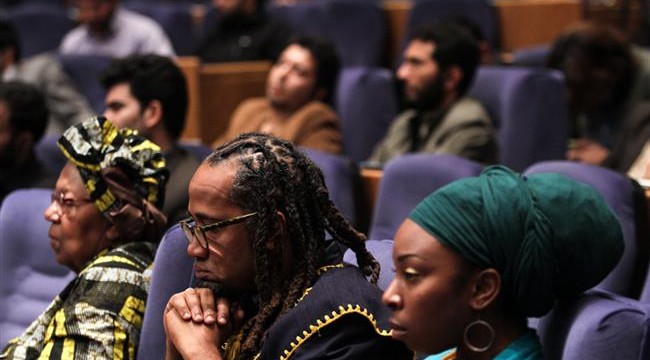 Tehran hosts black activists in confab over US police brutality

Tehran is hosting several African American activists in the third edition of the New Horizon conference, which deals this year with police brutality against African Americans and other people of color in the United States.

The participants who are mostly from the United States and several European countries present lectures criticizing police brutality against African Americans and widespread human rights violations both in domestic and international arenas in the US community.

US has seen a surge in protest against police by Black Lives Matter activists who argue that officers resort to racial profiling in dealing with African Americans, several of whom have recently been killed although they were unarmed.

“These extra-judicial police killings are result of misperceptions of a violent black male, a construct perpetuated and perpetrated since the birth of a nation up to now,” said Wilmer Leon, a political scientist attending the event.

Amir Sulaiman, an African American poet present at the conference, said, “It’s a problem that affects everyone so the solution has to come from everyone and it begins in the hearts.”

US President Barack Obama has admitted that he knows racial profiling by police is a real concern in part because he has experienced it firsthand.

Obama recalled a Chicago event with law enforcement officials who told him to pull over for no good reason.

“Most of the time I got a ticket, I deserved it. I knew why I was pulled over,” Obama said. “But there were times when I didn’t.”

He cited a report released this week showing that many African Americans have similarly been pulled over or frisked for no clear reason.

“The data shows that this is not an aberration,” said the president. “It doesn’t mean each case is a problem. It means that when you aggregate all the cases and you look at it, you’ve gotta say that there’s some racial bias in the system.”