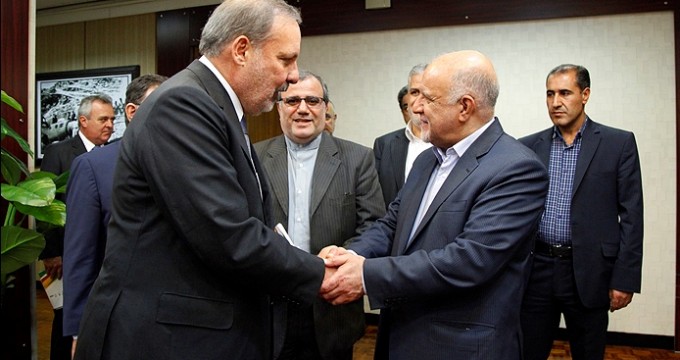 Tehran, Oct 27, IRNA – Minister of Petroleum Bijan Zangeneh said Iran is interested to develop its relations s with Brazil and is also ready for cooperation with the Latin American country in various fields of energy including LNG and deep-water drilling.

“Both countries are oil-rich and Brazil has valuable experience in deep-water oil production,” Shana quoted him saying at a meeting with the visiting Brazilian Minister of Development, Industry and Foreign Trade Armando Monteiro here on Tuesday.

Monteiro, who is visiting Iran heading a trade delegation, welcomed his meetings with Iranian officials and said, “We hope to turn these talks to a roadmap for future ties in different fields after our return to Brazil.”

Following the meeting, Zangeneh told reporters that Brazil is considering buying LNG from Iran and that a joint working group will set up to follow up the agreements reached in the negotiations.

“Iran needs Brazil’s experience in deep-water drilling in order to use it for producing oil in the Caspian Sea,” the Iranian minister added.

He refused to announce a precise date for the start of oil cooperation between Iran and Brazil but added, “We were behind the closed doors for a while and now there is open room for those interested in negotiations and cooperation with Iran after which we can plan the implementation.”

The Brazilian minister welcomed his talks with Iranian officials and expressed the hope that Tehran-Brasilia bilateral trade will increase to 5 billion dollars in the short term, up from the current 1.6 billion dollars.

“Oil can be added to the future joint investment ventures between Iran and Brazil,” Monteiro said.