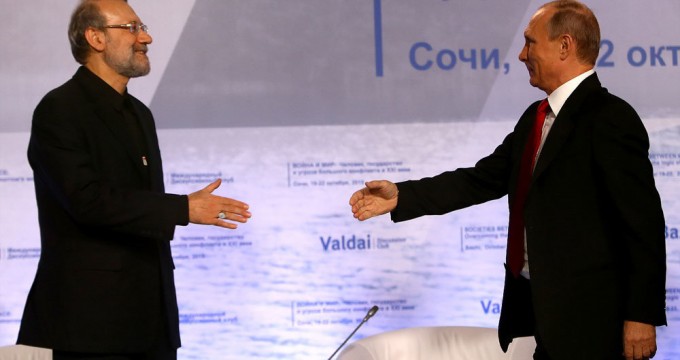 Tehran, Oct. 25, The Iran Project – The leader’s acknowledgment of JCPOA and his guidelines for the accord’s implementation, the President’s response to the leader’s letter and Iranian Parliament Speaker Ali Larijani trip to Russia to attend the annual meeting of 2015 Valdai Discussion Club dominated the country’s media outlets in the past week(18 Oct.-25 Oct.).

Iran’s top diplomat in London for talks on regional issues

Iran’s Deputy Foreign Minister for Arab and African Affairs Hossein Amir Abdollahian left Tehran for London on Monday for talks on different regional and international issues.
No solution to Syria crisis without Iran: German FM
German Foreign Minister Frank-Walter Steinmeier stressed there will be no solution to the crisis in Syria without Iran’s participation in the peace process.
Leader acknowledges JCPOA approval by SNSC
Supreme Leader of the Islamic Revolution Ayatollah Seyed Ali Khamenei on Wednesday acknowledged the approval of the Joint Comprehensive Plan of Action reached with six world powers in Vienna on July 14 by the Supreme National Security Council.

Managing Director of the National Iranian Oil Company (NIOC) said there is the capacity of huge investments in Iran’s lucrative oil industry before foreign firms following removal of sanctions.

The President Middle East and North Africa of Total Exploration and Production said France’s energy giant is ready for financing Iran’s oil projects as well as for transferring of technology following removal of sanctions.

The Swiss government says it plans “in principle” to ease sanctions against Iran in line with the European Union and the United Nations following an international accord on Tehran’s nuclear energy program.

Microsoft preparing to invest in Iran

Officials in Tehran said on Wednesday that Microsoft as well as several other leading US tech enterprises are preparing to enter the Iranian market in the near future.

Iran to start oilfield-investor bidding process by end of March

Iran is preparing by the end of March to start soliciting bids from international companies for rights to develop oil fields as the country looks ahead to the removal of economic sanctions that have hobbled its crude production and exports.

Iran and Russia on Thursday agreed to establish a joint bank in a bid which is meant to facilitate financial transactions between the two countries.

The conference to unveil Iran’s new oil contracts will be held in Tehran on November 28-29, said an official in the Ministry of Petroleum.

A deputy Iranian defense minister has urged the formation of a great Asian coalition to counter terrorism.

The Iranian Army, backed by the Khatam al-Anbia Air Defense Base, begins a second day of a large-scale military drill in west and northwestern Iran.

The Islamic Republic of Iran’s Army staged the second and final day of a large-scale military maneuver, code-named “Muharram”, whose aim was to enhance the forces’ preparedness against any foreign threats.

Russia’s U.N. envoy on Thursday said the United Nations Security Council will examine the technical details of a ballistic missile test by Iran, which the United States and its European allies have said violated U.N. sanctions.

The first marathon of producing Iran’s digital content hosted by Sharif University of Technology will be held in late November, 2015.

Iran’s VP Ebtekar commented on the alignment of domestic environmental policies with global plans like the SDGs.

Iranian researchers form Amirkabir University using a type of polymer and carbon nanotubes have offered a nontoxic method for differentiating bone marrow cells into nerve cells for treating neurological diseases such as Alzheimer’s.

The removal of draconian sanctions on Iran will enable the country to quadruple its efforts to curb fossil fuel emissions, the country’s lead envoy at UN climate negotiations says.

Telecommunications giants in Europe and the US by attending Iran’s pavilion at Gitex expressed willingness to enter Iranian ICT market, Director General of international business development for science and technology Ruhollah Estiri said on Wednesday.

Former US Secretary Of State Henry Kissinger argues that the United States strategy in Syria should focus more on defeating the Daesh (ISIL) terrorist network than removing President Bashar al-Assad.

Chairman of the Iranian parliament’s National Security and Foreign Policy Commission Alaeddin Boroujerdi rejected the claims that Tehran’s former ambassador to Beirut, Qazanfar Roknabadi, who went missing during the recent crush in Saudi Arabia is dead, and said there is a growing body of evidence vindicating his abduction in Saudi Arabia.

The UN Educational, Scientific and Cultural Organization (UNESCO) has approved a resolution, criticizing Israel for restricting Muslim worshipers’ access to the al-Asqa Mosque and failing to protect Muslim heritage sites in the occupied Palestinian territories.

US experts claim that Bashar Assad’s visit to Moscow and talks with Vladimir Putin opens the way at last for a negotiated political solution to the Syrian civil war.

Germany to Bibi: No, we’re responsible for the Holocaust, not Palestinians

Israeli Prime Minister Benjamin Netanyahu’s attempt to blame the Holocaust on a Palestinian religious leader has drawn condemnation from Palestinians, politicians, and historians. To that list of critics, now add Germany.

The Iranian speaker of parliament (Majlis) says Russia’s military intervention in Syria against terrorist groups was well timed and considered.

Another Iranian General, 7 other IRGC members killed in Syria

A top commander of Iran’s Islamic Revolution Guards Corps (IRGC) was killed in clashes in Central Syria last night, bringing the number of IRGC casualties in the war-torn country in the last couple of days to 8.

Tony Blair: Invasion of Iraq contributed to rise of ISIL

Former UK Prime Minister Tony Blair said that US-led intervention to Iraq in 2003 contributed to the rise of ISIL.

The Syrian President Bashar Assad has agreed to hold preliminary elections in the country, on the condition the move has the backing of the population, a member of Moscow’s Parliamentary delegation has told the TASS news agency.